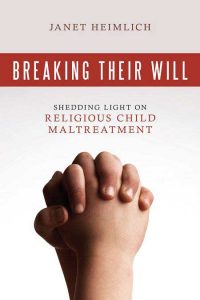 It’s interesting how certain patterns emerge in our lives sometimes. Part of it, I expect, has more to do with awareness than actual coincidence, like when I start seeing blue Pruises (Prii?) everywhere after buying one.

Yesterday I got a book in the mail called Breaking Their Will: Shedding Light on Religious Child Maltreatment by Janet Heimlich. And a couple of days before that I got an email through my website, which I’ll share in a minute.

A while back I wrote a few pieces about my son, Mattias, who is dealing with Asperger Syndrome. The first was about when we told him about his special condition, and the second was about the less enjoyable side of Aspergers: the meltdowns. Third was one about his tendency to obsess his way into an emotional knot.

More than just telling the story of a rather remarkable kid, I try with these pieces to work through how to deal with such challenges, and hopefully, how to find God in the middle of it all. I think that both those affected by special needs and those who care for them need the assurance that they’re not the only ones, and I know I always find encouragement from letters I get from folks who appreciate what I’ve shared.

Sarah’s letter, however, was the hardest yet to read. I’ll call her Sarah out of respect for her confidentiality, though I did get her permission to share her note. She wrote me after the series of articles above published. Her story is heartbreaking.

I read your articles on Sojourners with interest. I really liked how you linked your son’s experiences to how people do not like to take anything for free. It was very thought provoking.

I am contacting you because I am a Christian who has Aspergers Syndrome (AS), like your son. I can relate to his tantrums and the other things you mention about him, like his mood swings. I also have ADHD and Bipolar Disorder. If you need an insider’s view to help you understand your son, I can give that to you. I have a lot of articles I’ve written about my experiences and lessons I’ve learnt with AS. I also do public speaking about it.

I have one problem though. My parents don’t understand me and my mother says Aspergers is not biological but simply a curse from Satan. She says that if I try using coping mechanisms to deal with my symptoms, I am giving the curse a right to stay in me. She thinks I can get rid of AS overnight by rebuking it and going for deliverance. She thinks I’m not doing that enough and hence it’s my fault I still have AS. I do not agree. I’ve been through a lot of deliverance and I do not feel opressed by demonic power anymore. I am now free. I have learnt to accept myself and my AS. But my mother doesn’t like me accepting AS in my life.

If I get angry at her because she won’t listen to what I say about AS, she thinks I am manifesting a demon and she refuses to listen to me at all. She insists on praying in tongues and totally ignoring me. That hurts me.

I wrote back with this response:

Thanks so much for your email. My heart breaks a little in reading your story, but I do hope that in sharing it you find some hope for healing.

All I can say is that you are not cursed. You are not a mistake. You are a beloved gift from God to the world, whether people in your family or others can see it or not. As the father of a child with Asperger Syndrome, I can understand why it can be hard to act lovingly toward a child with these challenges at all times, but that does not mean you are bad, unworthy of love or any less a child of God than anyone else.

Prayers especially for your family to see the Divine in you, as I am certain it is there.

Thanks again, and blessings in your journey.

Talk about religious abuse.We have to do better than this in serving those among us with special needs. Yes, it’s hard to have a kid like mine in church sometimes, and we’re not naturally set up to accommodate folks who don’t understand and follow “the rules.” But Jesus was found among the afflicted, so if we’re to be like him, there is no other option.

Prayers for Sarah, for her mother, and for the church that has convinced her that treating her daughter this way is God’s will. Love is bigger than all the hurt, but it doesn’t insist itself; it has to be welcomed in.