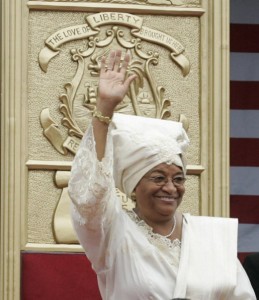 Last Friday, three women were awarded the Nobel Peace Prize for their commitment to women’s rights. Two of those women, President Ellen Johnson-Sirleaf and Leymah Gbowee, were from Liberia, the country I called home for most of my elementary school years.

I haven’t stopped grinning since I heard the news. See, it was in Liberia that I first witnessed the true ugliness of gender injustice, first understood that a tiny seed of pride and superiority dropped into the heart of a man would blossom not into a sheltering tree, but into an ugly, invasive weed that choked the life out of everything around it.

My “Damascus road” experience happened when I was nine years old, peering out the window of our second-story apartment in Monrovia. Just outside our gate, a woman was curled up on her side under a palm tree, worn tee-shirt stretched thin across her torso as she shielded her head with her dusty black arms, her lappa-clad knees tucked close to her chest. The man kicking her wore camouflage, and had a government-issued machine gun slung over his shoulder.

I was horrified. It wasn’t that I hadn’t witnessed beatings before—to the contrary, they were common in Liberia. But this was different, an armed man beating a helpless, cringing women. And I had heard the whispers, the muted conversations adults thought I was too young to understand, about what men with guns did to women.

I heard my father approaching and froze, expecting to be shooed away from the window. But he stopped a few steps behind me and just stood there, watching the scene unfold over my head. Then he sighed, turned, and walked away without a word.

The tectonic plates in my young soul shifted. For the first time, I realized there were some things my father, the strong, sensible, white American male, couldn’t fix. That if he went out there and did what every fiber of his being was undoubtedly screaming to do, he would only make things worse. To rush into the street and put himself between a murderous mob and a thief was one thing, and he did it on a regular basis. But to put himself between a man and a woman would constitute such an insult that the woman could very well end up dead.

That’s when I realized that violence against women isn’t a social problem; it is a spiritual problem, a highly-contagious disease that eats away at the hearts, souls, minds and bodies of humanity. You can’t address the problem by treating the symptoms—you have to go deep under the surface and neutralize it at its root, that tiny seed of pride, disdain, bitterness, and superiority allowed to germinate in the soul.

That is precisely what the women of Liberia have been doing for the last decade, recognizing their God-given worth, claiming their voices, and banding together to demand not just national but personal shalom, for themselves and the next generation. Consider the words Leymah Gbowee of as she led hundreds of women to the capital of Liberia in 2003. “We the women of Liberia will no more allow ourselves to be raped, abused, misused, maimed and killed! Our children and grandchildren will not be used as killing machines and sex slaves!”

Liberia still has a long way to go. We all do. But where the Spirit of the Lord is, there is freedom, and this hope makes us very bold.

—-
Jenny Rae Armstrong is an award-winning freelance journalist who blogs about faith, social justice, and women’s issues at http://www.jennyraearmstrong.com/. She is passionate about building up the body of Christ by building up women, in her rural community and around the world. She loves making new friends, so drop by her blog and say hi, or follow her on Twitter or Facebook.