Many years ago, in my first year of teaching adults, I had an older female student who had lived in Iran.

She told us of the ‘morality police’ who had ‘religious’ if not official authority to roam the streets and marketplaces and hit women with large sticks if they violated local standards of decency by revealing a knee or an elbow.

Yes, these were men who (eagerly) took upon themselves to publicly threaten, humiliate and assault women in the name of their religion.

We have far too many men in America who, just as eagerly, are willing to stand outside of public bathrooms and insure that every female looks ‘feminine enough’.

They are enforcing the American version of Sharia Law.

Except that they hate Islam and Sharia law.

But logic would require that defense of women’s restrooms was essential and in response to crimes committed in them. And that transgender people ‘sneak’ into them to commit horrible crimes – crimes that are statistically non-existent.

No, none of those things are true.

Sexual assaults are in fact all too common in churches and other religious settings. Who have we become when men, for whatever reason, feel justified in beating and shaming women in public?

This is clearly not America’s finest moment.

I don’t find it difficult to picture another set of doors from America’s painful and violent past.

These doors have ‘white’ and ‘colored’ over them.

And I can visualize the same lynch mob mentality should any ‘colored’ person use the ‘wrong’ bathroom.

Fear does strange things to us.

Fear disorients us and causes us to violate others – and ourselves.

And our religion is tied in knots to justify our actions.

What we are seeing in too many corners of America right now in the always-terrifying unholy alliance of ignorance and violence. Some of us, apparently, are eager, like the Pharisees, to act as judge, jury and executioner. These people are not ‘conservatives’ – they are thugs, bullies and anarchists.

If they were real conservatives, they would be alert to actual danger and call security, the police or 911.

But no, they don’t want to do that.

These people want vigilante justice, and they want it now. They want blood, and they want it on their own hands. Assaults are, in fact,  a real threat–to Trans people. And to those who don’t look ‘feminine enough’.

Transgender, after all, refers to identity, not attraction or behavior. As to common sense, which bathroom should Caitlin Brenner use? Should she use the female, and appear as if she belongs, but risk arrest in some states? Or should she use the men’s room where she clearly did not fit in, and would almost certainly be susceptible to harassment or harm?

What shocks me most about this national conversation is how this muddled mix of half-truths and blatant falsehoods, with a strong seasoning of fear and hysteria jells into our favorite solution for almost every social ill: threats and violence.

I don’t know who put together this meme of the three doors, but I got it from a ‘Christian’ website. 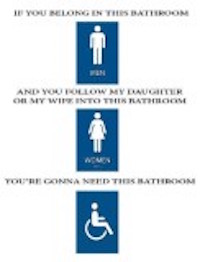 I wonder how many of those who reposted it noticed the reversal of the character, calling and mandate of Jesus; instead of healing and restoring, we have ‘Christians’ lusting after blood and violence – in the name of their faith.

What is the value system of a society that threatens harassment and violence to someone who needs to urinate?

Notice the wording on the graphic; it does not say “if you threaten or harm anyone” the ‘crime’ committed is walking into the bathroom at the ‘wrong’ time.

I can’t help thinking of the prayer,  “Please Lord, save us from your followers!”