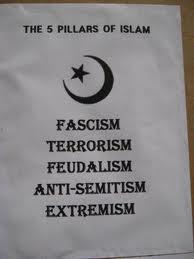 More and more we are going to have to deal with Muslims and it becomes increasingly difficult to know just what to do and what to think, given the ongoing war on terrorism.  On the one hand, we must know that most Muslims are good peace-loving people, and are just as upset by what the terrorists are doing as are the rest of us.  But that doesn’t curtail our growing fear of Muslim people.  The horrendous actions of a few have created problems for the many.

If you’re honest, you probably will admit that it makes you a bit uneasy when men who appear to be from the Middle East get on a plane or bump into you in a shopping center.  And you probably hesitate in greeting women in Muslim garb with the common courtesies like smiling or giving a friendly nod.

Prejudices towards Muslims are still growing, even among those who consider themselves open-minded and accepting of cultural diversity.  There are some of my socially liberal Christian friends who presently have no objection to profiling such people and having guards give them thorough body searches when they are checked through security at airports.  A decade ago these same “non-discriminating” and “non-prejudicial” persons would have been outraged at the mere suggestion of profiling. Even most African-Americans, who condemned profiling when they were its victims, now think that it may be a necessary evil.

In the midst of the ugly attitudes that initially arose at 9/11 and have continued to permeate our culture since, we are going to have to make some decisions about how we will relate to Muslims.  What I hope all of us decide is to try to be a bridge between the Muslim community and the rest of America.  Jesus has called us, according to 2 Corinthians 15 to a “ministry of reconciliation.”  Remember Paul’s message to the Athenians on Mars Hill, in which he declared that we are all children of the same God, regardless of our differences.

If you’re going to accept this challenge and become the kind of Christians who work to bring people together and to break down the walls that separate Muslims from Christians, a good place to start is to get to know some Muslim people personally.  May I suggest that sometime you invite a Muslim couple to dinner, making sure that you attend carefully to Islamic dietary laws.  Make the visit an opportunity for them to tell you what they believe and how they practice their religion.  You’ll be surprised how much about Jesus they know and what there is about Jesus in their holy book, the Koran.  Just for starters, Muslims believe that Jesus was virgin born; that he performed miracles (even though there is no claim that Mohammed ever did); and that there will be a second coming of Christ.  You are likely to learn that only a very small percentage of Muslims are in the Islamic Fundamentalist movement.  Furthermore, you’ll probably be surprised to learn that those practices in Sharia law that we find most offensive, such as stoning to death homosexuals and any woman caught in adultery, are not prescribed in the Koran.  Instead, they are practices which are taught in the Old Testament.

I have found that in almost every case wherein I have listened carefully to a Muslim explaining Islamic beliefs and practices, that Muslims, with graciousness, have asked me in return to explain what I believed.  The opportunity to witness for Christ and share my faith always came when I first listened and learned from my Muslim friends.  Too often we speak before we listen, and instead of a time of mutual sharing, arguments ensue.

All of us must make it a point to stand up for Muslim people whenever they are unjustly described or condemned in private conversations.  Martin Luther King, Jr. once said that “in the end it will not be the attacks of my enemies that most hurt me, but the silence of my friends.”  If you are going to be friends with Muslims (and how else can you get to share Christ’s love and salvation with them?), then you cannot remain silent when ugly untruths are spoken in your presence.

Needless to say, this will be hard and will make you subject to misunderstandings by fellow Christians, but remember the words of Jesus who said: “Blessed are ye, when men shall revile you, and persecute you, and shall say all manner of evil against you falsely, for my sake.” (Matthew 5:11)