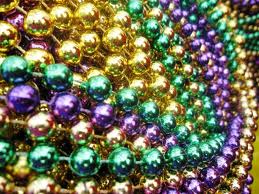 It’s been almost 26 years since I left Louisiana with my parents, and I still really miss the Mardi Gras season. Mardi Gras is one long, enormous party – in the best, and sometimes the worst, sense of the word. Every single day for a few weeks leading up to Fat Tuesday there is something exciting going on all over the New Orleans region.

It was only in recent years that I began to reflect a lot about the Christian meaning behind the season of Mardi Gras, and I’ve discovered that as a Baptist, I may have missed out on what Mardi Gras can teach me about faith and celebration.

We Baptists need to lighten up, let our hair down, and live it up from time to time. Even King David got so excited he danced through the the streets in a big parade, eventually stripping down to his Fruit-of-the-Looms. Sounds like Mardi Gras to me.

Remember the story of Jesus turning the water into wine? Yes, my Baptist brethren, it was real wine – as in the Tom Paxton song, “bottle of wine, fruit of the vine, when you gonna let me get sober?” I’m certainly no biblical scholar, it seems to me that Jesus was giving his blessing to a party (not a dignified and quiet reception, but a par-TAY).

All Baptists know that Jesus was supposed to turn out the lights and declare the party over. Jesus should have stopped the party and preached on the evils of alcohol. Some Baptists know that Jesus was supposed to throw a good-old-fashioned-guilt-trip on everyone about how they were wasting all that money on fun when it could be spent on helping the poor and neglected. Jesus should have stopped this selfish party and got them busy doing some justice.

That’s what my Baptist Jesus would have done. But as I remember Mardi Gras in New Orleans, I’m reminded that Jesus wasn’t and isn’t (and nor will He ever be) a Baptist.

There are plenty of reasons why my hometown shouldn’t be partying. Murders and high crime rates still make the national news. Racial tensions are still high. Poverty is still a big problem. And over six years later, Hurricane Katrina still haunts large portions of the region.

And yet, once a year, in the midst of all the messiness of everyday life, everyone comes together to celebrate. And maybe Jesus – the not-so-Baptist Christ who turned water into wine to keep the party going longer – can be found along Canal Street yelling out laissez les bon temps rouler!

It’s been over twenty years since I’ve returned home for Mardi Gras. I’ve gotta go back soon. And, when I do finally get back, and I see an overly joyous man dancing in his underwear at front of the parade, in honor of King David I’m going to toss him some beads …