This past Sunday (June 2nd), Franklin Graham and fellow Christian nationalists organized a “special day of prayer” for the president. Though Trump spent the morning on his golf course in Virginia, he stopped on the drive back to the White House for a brief photo as pastor David Platt prayed for him at the McLean Bible Church. No doubt, Trump needs prayer. But faith leaders know that we cannot simply offer prayers for people in authority when they are abusing power. We have a moral obligation to publicly confront the abuse and call our elected leaders to repentance.

Rabbi Arthur Waskow has been calling many of us to attend to the two covenants in public life. Since its inception, our nation has lived by these two covenants. One we made among ourselves and institutionalized in the Constitution and legal tradition that has aspired to greater justice than it has guaranteed in practice. The other covenant is far less formal and explicit. Every church, synagogue, mosque, and temple contributes to this public commitment to love and justice when they urge their communities to apply their deepest values to the content of government. We make our common life not only with each other, but also with some sense of sacred truth that is beyond us.

The two covenants connect when the Constitution speaks of “due process” and “equal protection under the law.” Our legal tradition speaks with a moral force when it prohibits the establishment of a single religion and protects the right of individuals to practice any religion. From the other side, the two covenants connect when any religious tradition applies its moral vision to the behavior of government. When the Constitution names “high crimes and misdemeanors” as grounds for impeachment, it is reaching toward the morality of the second covenant to hold the chief executive of our common life accountable to the values of our deepest moral and religious traditions.

Whether or not Congress holds President Trump accountable for his political corruption and policy violence, the faith community has a moral obligation to offer a prophetic indictment of the immorality we have all witnessed in plain sight.

“Woe unto you who legislate evil,” Isaiah says, “and rob the poor of their right.”

This administration’s immoral attacks on access to healthcare, anti-poverty programs, public housing, voting rights, and equal protection under the law must be challenged. And because so many of these attacks have been carried out under the guise of “religious liberty,” faith leaders have a special obligation to lift our voices in the public square.

“Faith leaders” is a broader category than “clergy.” Nuns are in Roman Catholic parlance not called “clergy,” but they are certainly faith leaders. Islam does not consider imams clergy per se, though they and others who lead prayer are certainly leaders of the faith community. Quakers often say either that they have no clergy or that all of them are clergy. Jewish women who are taught in the emerging tradition of Kohanot — the guild of “Hebrew priestesses” — do not call themselves clergy, but they are certainly faith leaders. And within many congregations of the faith-filled, there are some who clearly lead without a title. All faith leaders are welcome to speak out for the common good. 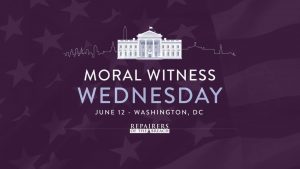 On June 12, wearing the sacred garb of our traditions, we will gather in Washington, D.C., beginning at 9:00am, at the New York Avenue Presbyterian Church, four blocks from the White House, at 1313 New York Avenue NW for Moral Witness Wednesday.

At the church, there will be explanations of our procession to the White House, of the legal plans for those who choose to risk arrest by persevering in nonviolent protest even if they are ordered to stop, and of the program. There will be prayers. And at 10:30am, we will recite a litany of challenge and affirmation as we go forth in faith-filled procession to the White House.

To engage in two forms of support and participation in this action, visit www.breachrepairers.org/moralwitnesswednesday. One action includes signing a petitionary “Letter of Spiritual Challenge and Affirmation,” and the other involves signing up to take part in the June 12th action. You can choose one or both of them. And if you choose to be present on June 12th, you can choose whether to risk arrest or not.

As a faith leader in the Red Letter Christian movement, I invite you to join us in spreading the word about this call to prayer and action. It’s not enough to lament the ways our faith is being misused in public life. We have an obligation to step forward together and demonstrate the better way that’s possible.

Forward together, not one step back!