If we want to move beyond the vicious cycles of offense and revenge that dominate the status quo – and result in suffering for Christians in the Middle East, American Christians can come together in six ways:

1. We must join together to condemn human rights violations whenever they occur and upon whomever they are inflicted. We must become vocal advocates for the rights of religious minorities – be they Christians, Muslims, Jews, Sikhs, Hindus, or secularists – from Texas to Timbuktu, from Tennessee to Tehran. There can be no double standards.

Here we must be careful to distinguish hateful extremists from peaceable believers. American Christians would be rightly appalled if Muslims were to quote crazy extremist pastors from Florida and Kansas to characterize all Christians as Quran-burning hate-mongers. Israeli Jews would likewise be appalled to be defined by the infamous “kick out all Arabs or make them our slaves” quote from extremist rabbi Meir Kahane. Hundreds of millions of Muslims are equally mortified when horrific statements about killing “first the Saturday people, then the Sunday people” are used to characterize all Muslims. Hateful extremists must be exposed – but never used to create guilt by association.

2. American Christians must stop supporting foreign policies that purchase American security at the expense of the security of others, including fellow Christians in the Middle East who have already suffered so much. And we must face – and publicly admit – the unintended consequences of past policies, over the last decade, and over longer time spans as well. Instead, we need to articulate a creative, positive, progressive, faith-inspired dream for a better world, undergirded by a coherent, constructive foreign policy.

Related: When Christians Speak of Violence in Islam – by Dan Martin

3. We must seek solutions in Israel/Palestine that are Pro-Israeli, Pro-Palestinian, pro-peace, and pro-justice. That will require us to stand strong for Israel’s right to exist in peace and safety while standing equally strongly against the spread of settlements in Palestinian lands, the ongoing occupation, and other actions that dehumanize and oppress Palestinians. To pray for the peace of Jerusalem will also require us to pray for the peace of Palestine and the whole Middle East – a peace that depends upon justice and reconciliation.

4. We must realize that our continued addiction to dirty energy results in dirty foreign policy. The most profitable industry in the history of humanity has great power, and it has found ways to “externalize costs” upon us all. In response, we must become more aware of the true costs of our current energy policy, and we must become advocates of clean, sustainable energy and clean, sustainable foreign policy as well. There is a relationship between filling our gas tanks and what happens to our Christian brothers – and their neighbors – in the Middle East.

5. We must seek to understand religious violence, which will require us to understand violence in general – others’, and our own too. We need to see the close relationship between hate (for them) and love (for us), and between religious identity and hostility (as I explored in my most recent book).

6. We must build relationships – grass-roots, have-a-neighbor-over-to-dinner relationships, with people of other faiths. We must demand that our national and global religious leaders do the same – not only talk about other religions, but talk with their corresponding leaders – not just to solve problems, but also to build friendships, the kind exemplified, for example, by Desmond Tutu and the Dalai Lama. Through this kind of pre-emptive peacemaking, we must set in motion healing cycles of faith-inspired human-kindness that provide an alternative to vicious cycles of offense/revenge/counter-offense/counter-revenge.

When we do so, along with decrying the hateful actions of extremists, we can celebrate the heroic acts of kindness and solidarity of more “normative” people of faith – like the Egyptian Christians who protected mosques and the Egyptian Muslims who protected churches on many occasions over the last few years.

A colleague who has invested in these kinds of relationships recently sent me two photographs. The first is of an official sign warning Israelis not to venture into Palestinian territory: 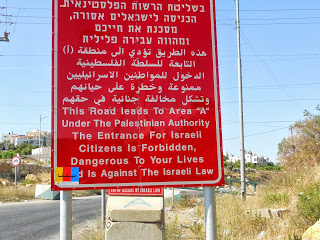 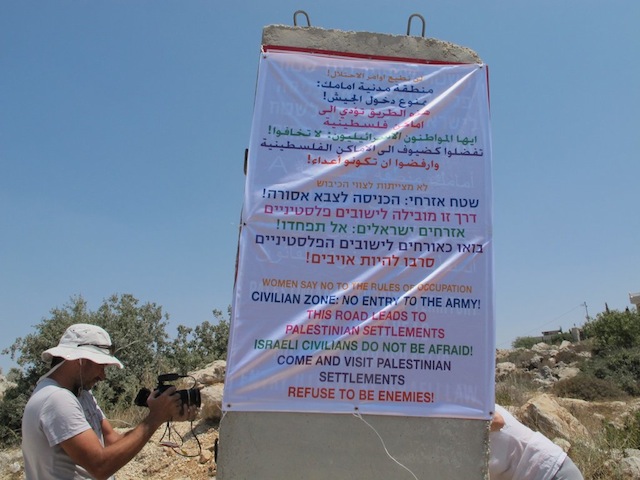 These Jewish women have an important message for Christians, a message that echoes the words of a Jewish man who himself lived in deeply conflicted, violent times in which extremists were all-too-ready to shed blood in the name of their God or their nation. We can refuse to be enemies. We can choose healing cycles of hospitality over vicious cycles of hostility. That doesn’t mean being silent denial about wrongs, but it doesn’t mean responding to hostility with hostility either.

Also by Brian: Trayvon and George – A Tale of Two Americas

It is indeed inexcusable for Christians to remain silent about the horrific violence being done against Christians around the world. But it is also inexcusable to respond to that violence in ways that only intensify fear, hatred, mistrust, misunderstanding, and revenge. We must speak out in ways that seek higher ground, a new way of holding religious identity and seeking religious reconciliation. We will often fail and fall short in our attempts, but I would rather fail in this venture than succeed in the alternatives. I hope you feel the same way.

The hate and evil of the Al Shabaab terrorists can not be overcome with corresponding hate and evil. Nor will it be overcome with silence and passivity. There is only one force that can overcome it. That power appears weak, but it is the strongest power in the moral universe, if we dare to believe it and practice it. It simultaneously calls us to speak the truth about evil, and to overcome it – with abounding good. May every new outbreak of evil inspire us to greater counter-action for good, following the way of Christ.