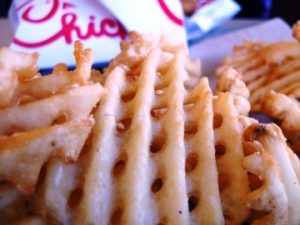 I [Andrew] was just asked by a media outlet my thoughts on tonight’s LGBT Kiss-In Protest at Chick-Fil-A, and how Christians should respond. Here was my answer:

This Chick-Fil-A situation got out of control really quick, in no small part to a number of pundits on both ends of the spectrum adding unnecessary fuel to the fire. They made this situation more than Dan Cathy voicing his support of traditional marriage. They made it a highly structured fight; setting it up as the battle lines must be drawn because the winning worldview will immediately take its place as the dominant majority in culture.

Tonight’s kiss-in protest is an unfortunate, and misguided subsidiary action to a much broader, nuanced conversation that needs to happen surrounding culture engagement. Yes, this situation is about freedom of speech and religious liberties. But what is lacking is the understanding that there is freedom of speech on both ends of the spectrum. It seems that this Chick-Fil-A situation has people fighting for a freedom of speech for only their version of what they speak. There is no winner in that short of ditching the constitution. That is why August 1st’s Chick-Fil-A Appreciation Day and tonight’s Kiss-In are secondary to educating each other in our daily interactions what it means to live in the tension of the reality of our contemporary society: The United States, where Christianity is still the dominant religion, is a pluralistic, post-modern country comprised of a variety of competing worldviews fighting to dictate cultural normalcy.

The main question today must be how we relate to each other with strongly held convictions, rather than continually try to force everyone into theological, social or political alignment. That will never work, as highlighted by the last three days. This gets us back to your original question; what to do tonight: Bring the gay kissing couples outside Chick-Fil-A some McDonalds (because they’re not going to eat Chick-Fil-A), say ‘I’m a Christian and I love you like Jesus, ’ then walk away, and hope this evening finishes without more damage done. Then we can get back to the actual work of living out our Christian beliefs like Jesus instead of talking about them. That’s a daily exercise in orthodoxy, not a one-off event that anyone is supposed to care about.

What are your thoughts?

—–
Andrew Marin (@Andrew_Marin and www.facebook.com/Marin.Andrew) is the President and Founder of The Marin Foundation which works to build bridges between the LGBT community and the Church. Andrew is the author of the award winning book,  Love is an Orientation: Elevating the Conversation with the Gay Community (InterVarsity Press, 2009),  which has won more awards than any other individual book in the long-standing history of InterVarsity Press. He and his wife, Brenda, live in the Boystown neighborhood of Chicago.