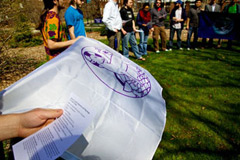 When Goshen College, a Mennonite-owned institution, announced their decision to play the US national anthem at select sporting events in spring 2010, thousands were disappointed that a peace church institution would introduce a practice that is so contrary to worldwide Christian fellowship and peacemaking.

In response, Nekeisha Alexis-Baker and I outlined three main reasons we oppose the decision in an open letter to Goshen College and invited all Christians of good will to add their names before we delivered it to the college. We wrote:

At the heart of the national anthem is a message that glorifies war and violence for one nation’s benefit. These themes are inherent in the words themselves “the rocket’s red glare, the bombs bursting in air” and they are inherent to the ways in which the anthem is used to inspire patriotic fervor. The very habit of playing the song before sporting events arises out of the World War II era, when baseball became a stage for nationalistic displays. The fact that the anthem has since become a pre-game ritual for most sports should not distract Christians—especially those who are committed to Christ’s way of peace—from the anthem’s meaning or its history.

The national anthem also promotes the United States over and against other nations, violating Christian internationalism and worldwide fellowship. In an attempt to be “hospitable” to American patriots, we believe Goshen College’s decision rejects a higher call to be a transnational body that resists the boundaries set by nations. Furthermore, the institution is compromising its witness to the world by intentionally aligning itself with an entity that has engaged in militarism, oppression and imperialism since its inception.

Finally, we believe that playing the national anthem before sporting events is a formative ritual that will be detrimental to its community. Although you say that you are forming young adults to be Christ-centered, they will be formed into a practice that gives allegiance to America first. Instead of teaching them the cost of discipleship, this decision teaches them to cave into social pressures at the expense of faithful witness to the way of Christ and the path of peace.

When we finally stopped taking signatures this spring, approximately 1, 550 people had signed the letter, including Christian laypersons, pastors, priests and leading theologians from around the globe.

It was an overwhelming response that—coupled with alumni outrage and letters—immediately caused Goshen College’s board of directors to announce a review of the decision at their June 2011 meeting. Since that time, college administrators have conducted alumni surveys and listening meetings in which the majority of alumni expressed their heartfelt disappointment with the decision and their concern about the impact it would have on both the school’s and its denomination’s witness.

Well, the board has made their decision. Goshen has reversed its decision and will no longer play the national anthem, This is a great day for the Christian Church, for the Mennonite Church, and for Goshen College. The board states:

As a result of a thoughtful, thorough, prayerful period of listening, learning and discerning, it is the Board’s judgment that continuing to play the national anthem compromises our ability to advance the vision together. As a result, the President should find an alternative to playing the National Anthem that fits with sports tradition, that honors country, that resonates with our core values and that respects the views of diverse constituencies.

This decision will not be popular with the secular world that tried to get them to permanently change their practices. Goshen College is facing very serious problems driven by enrollment decline, financial fears, education shaped around professionalized learning, and secular models of governance.

This decision reflects that they have taken their Anabaptist roots seriously and are now trusting that God will provide for them, and that the problems they are facing cannot be overcome by caving in to nationalism.

Just as some of us supported them by pushing to get this decision reversed, I believe that we should support them in new ways through prayer, by calling and emailing to express our congratulations, by sending gifts and donations to help alleviate the financial hit they have and will take as a result of this decision, and by recommending students to Goshen College. They are no longer sleep walking when it comes to the national anthem, but have consciously and deliberately rejected it.

This decision would not have been possible, however, without the significant input of those laypersons, pastors, priests and theologians from around the globe who not only signed our petition, but contacted members of the board and made their hopes for a reversal known.

We Mennonites needed your help. Never before have so many Christians stated so clearly that these anthems and rituals have no place in Christian formation. The Goshen College Board of Directors listened.

So let’s thank God that Goshen College has decided to turn back that decision. I hope you will support them. I will.

As part of the effort to convince the board to reverse the decision, a booklet of stories about why it matters whether we sing it or not was produced and given to the board members. You can see a sample here:
http://dl.dropbox.com/u/219083/InOurOwnWords_Sample.pdf (*.PDF Adobe Acrobat document). If you would like to order a copy, send Doug Schirch an email: [email protected]

—-
Andy Alexis-Baker graduated from Associated Mennonite Biblical Seminary and has taught as an adjunct professor of peace, justice and conflict studies at Goshen College. He blogs regularly at the Jesus Radicals Blog and is currently a PhD candidate in Systematic Theology and Christian Ethics at Marquette University.