As the 28th Australian soldier was killed in Afghanistan, four Christian activists were arrested during a peaceful blockade of the secretive Swan Island military base in Victoria.

News of the death of Sergeant Todd Langley, 35, came on the second-day of the week-long “Peace Convergence” in opposition to Australia’s ongoing military involvement what activists have called an “unnecessary and ineffective war in Afghanistan”.

The four were charged with hindering police and obstructing a roadway.

“Ten years into this war it has created nothing but death and destruction. Passive opinions have changed nothing, it is clear civil disobedience is now necessary to take a stand against the war, ” said Moyle.

McKenna, whose work includes Christian ministry and nonviolence education, told the court: “I was nominated for Young West Australian of the Year and I received a National Peace Award for my work. Yet it is easy to be acclaimed for teaching peace, but harder to do it.”

“I stand before you today because I’m seeking to practice what I’ve been acclaimed for preaching.”

He explained the role of his Christian faith in motivating his peace activism: “I’m seeking as best I can to do what is right. Jesus tells me to love my enemies and it is my hope that that our actions might contribute to our society waking to a new imagination for solving our world’s most pressing problems including this unwinnable war causing so much suffering.”

All four pleaded guilty and were convicted of the charges, however no penalty was recorded.

In making the decision not to penalise the arrestees, Magistrate Ann McGarvie acknowledged public sentiment in support of the defendants anti-war position: “There are a lot of people in society who would agree with you.”

McKenna welcomed the ruling saying, “I don’t think we can underestimate the significance of the Magistrate’s decision to add yet another precedent for resisting this unwinnable war, coinciding with the death of another Australian soldier.”

University lecturer and Peace Convergence co-organiser Jessica Morrison, who was also arrested during the blockade, explained that activists were committed to peaceful resistance during the event, and that the arrests were expected.

“Having been in Afghanistan, I have seen the devastating results of this conflict and I know personally the cost in innocent lives for the Afghan people, as well as the cost to Australian soldiers, ” she said.

“We are fully prepared to be arrested using nonviolent civil disobedience.” 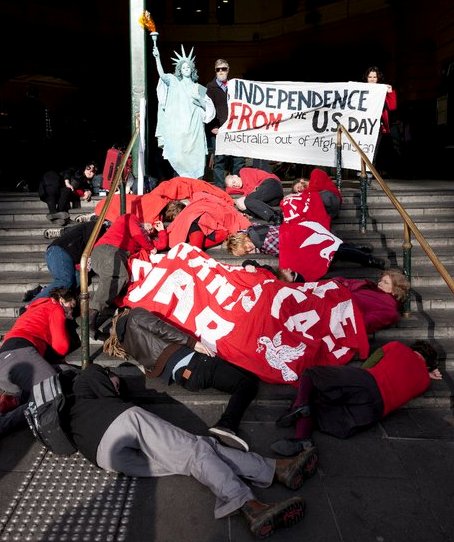 The Peace Convergence commenced on July 4, United States Independence Day, with a stunt on the steps of Melbourne’s Flinders Street Station featuring a human Statue of Liberty and a group of activists “dying” around her feet.

Activists held a banner which read, “Independence from the US Day. Australia out of Afghanistan.”

“A passer by from Afghanistan said he was almost moved to tears by our presence, and a man whose brother is serving in the military and said he couldn’t agree more with us.”

The activists then proceeded to Swan Island. While little is known about the full extent of military activities conducted at the Swan Island military base, peace activists chose it as a target for protest due to its known role conducting specialist training of soldiers involved in the war in Afghanistan.

“The Swan Island military base trains the SAS troops, which are the troops involved in assassinations and targeted killings in Afghanistan, ” said Morrison speaking to local media from the gates of the base during the blockade.

Swan Island is a 1.4sq km island near Queenscliff in Victoria. The military base occupies 175 hectares of the central and north-eastern part of the island and access to the island is restricted.

In a statement on the first day of action, Morrison explained the motivation of the convergence: “The majority of Australians agree that our troops must come home, but to date our government has been ignoring us. We cannot stand by while Australians and innocent Afghan citizens are killed by our military.”

The Labor government committed $1.6bn in the budget for spending on the Afghanistan war in 2010-11.

Prime Minister Julia Gillard maintains that our presence in Afghanistan is in Australia’s interests.

However the Prime Minister’s views are out of step with the majority of Australians.

Poll results published by ABC in early June show that 62% of Australians want troops out of Afghanistan within six months.

—-
Kate Ausburn writes on political and social justice issues. She has visited the United Nations to cover arms trade treaty negotiations, edited an online women’s lifestyle magazine and now writes a weekly political opinion column for London’s Australian Times newspaper. You can find her on LinkedIn and Twitter