Named one of Christianity Today’s “50 Women to Watch, ” Rachel Held Evans — the author of and A Year of Biblical Womanhood — is a popular blogger who devoted a year to living out what the Bible has to say to and about women. Today, RLC chats with RHE to learn more.

Let’s talk feminism. A few folks out there wonder if Rachel Held Evans might be an angry feminist for audaciously suggesting gender equality. Where has this image has come from? Any basis in reality?

I think any time you challenge ingrained power structures or various forms of religious legalism, you can expect to be labeled as “angry” or “divisive.” And sometimes I am angry; I think there are things in this world worth getting angry about. (The Sovereign Grace Ministries abuse scandal, alleged cover-up, and the continued support the organization has received from prominent evangelical leaders is an example.)  But at the end of the day, followers of Jesus have every reason to be hopeful. Through Jesus Christ, God is making all things new, one little mustard seed at a time, and so we can trust that one day there will be no more tears, no more abuse, no more power struggle, no more division, no more pain, no more inequality. Justice will roll down like water and righteousness like a mighty stream.

This grand vision sure helps keep things in perspective. Sometimes I lose sight of it, of course. I get too angry, too self-important, too prideful, too preoccupied with “winning, ” too caught up in the debate to see those with whom I disagree as fellow human beings. I think we all do from time to time. But on good days, whatever activism I’m engaged in springs from a commitment to being part of God’s restorative, redemptive work in the world as a citizen of an upside-down Kingdom in which the last is first and the first is last.

Do you readily identify as a feminist? Have you always? What does it mean to you?

Identifying as a feminist can be a lot like identifying as an evangelical. There’s baggage associated with each term, so it’s easy to give people the wrong idea.   My favorite definition of feminism is that it is the “radical notion that women are human.” In this sense, I didn’t learn to be a feminist from Margaret Atwood or Simone de Beavoir. I learned to be a feminist from Jesus: who defended Mary of Bethany as his true disciple, even though women were prohibited from studying under rabbis at the time; who refused to condemn the woman caught in adultery to death; who looked to women for financial and moral support; who bantered with a Syrophoenician woman, talked theology with a Samaritan woman, and healed a bleeding woman; who appeared first before women after his resurrection; and who charged Mary Magdalene with the great responsibility of announcing the inauguration of a New Creation, of becoming the Apostle to the Apostles.

Does the gospel of Jesus Christ conflict with or agree with patriarchalism and/or complementarianism? In what ways?

I think it’s important to note that in the creation narratives of the Bible, patriarchy is introduced in the context of punishment, in what Christians typically refer to as The Fall. “Your desire will be for your husband, ” God says to Eve in Genesis 3:16, “but he will rule over you.” Where there was once mutuality in the Garden, there is subjugation. Where there was once harmony, there is a power-struggle.  The writer of the Genesis, who undoubtedly had observed this power-struggle in his own world, calls it for what it is: a tragedy, an example of our collective brokenness and our desperate need for redemption.

We see the effects of this all around us today. Every 9 seconds, a woman in the U.S. is assaulted or beaten. Around the world, at least one in every three women has been beaten, coerced into sex or otherwise abused during her lifetime.  At least 3 million women and girls are enslaved in the sex trade. Study after study shows that societies characterized by the subjugation of women are more violent, more impoverished, and more unjust than societies that empower women.   And we see patriarchy in the Church too. In many denominations, women are still prohibited from preaching the gospel or leading their congregations. They are told that the mutual submission described by the Apostle Paul is actually only meant to work one-way, with women always deferring to the wishes of men. 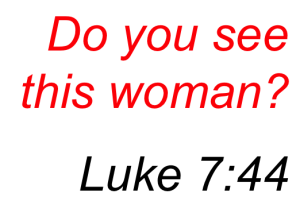 But the good news—the gospel—is that Jesus changes everything. With the resurrection of Jesus, and the inauguration of his Kingdom, the entire world is being made over! The old things have passed away, and “behold, new things have come”! I believe patriarchy is a result of sin, and that followers of Jesus are to be champions of equality. I believe it is our calling, as imitators of Christ, to reflect God’s new vision for the world, initiated through Jesus Christ,  in which there is no hierarchy or power struggle between slave and free, Jew and Greek, male and female, for all are one in the family of God (Galatians 3:28)

The apostle Paul wrote, “In your relationships with one another, have the same mindset as Christ Jesus: Who, being in very nature God, did not consider equality with God something to be used to his own advantage; rather, he made himself nothing by taking the very nature of a servant, being made in human likeness. And being found in appearance as a man, he humbled himself by becoming obedient to death—even death on a cross!” (Philippians 2:5–8).

You’ve taken issue with a few prominent church leaders who disagree with egalitarianism. Let’s say you bump into one of these Christian gentleman at Harmony House Coffee Co. in your hometown of Dayton, Tennessee. Best possible scenario, how does that conversation go?

I’d start by asking him how he likes his coffee because the next one’s on me!

In the best case scenario, we’d just get to know one another better—learn a little about one another’s backgrounds, families, favorite TV shows, senses of humor, hopes, and fears. The hardest part of engaging in the gender equality conversation online is that it’s really easy to reduce people to their positions. I’m as guilty of this as anyone else and have found that getting to know people aside from their status updates or blog posts is one of the best ways to move past the extreme polarization that so often characterizes the dialog.

I’d also be eager to find some common ground. Maybe we both care deeply about stopping violence against women, or we’re both in the middle of reading the same book, or we’re both obsessed with SEC football. Commonalities like these remind us that we’ve got more to talk about than our differences.

You’ve noted the virgin/whore dichotomy so prevalent in Christian culture. At RLC a few months back, we spoke out about how this particular church teaching shaped Elizabeth Smart’s self-worth. Can you suggest a more biblical narrative about female sexuality the church might choose instead?

Yes, I think we really have to get rid of these narratives that suggest a person’s “purity” is wrapped up in his or her virginity. Comparing girls who have had sex to chewed-up pieces of gum or cups of spit, no longer worthy of “true love, ” is incredibly destructive, as we saw in the story regarding Elizabeth Smart. So we start with the message that we are children of God, infinitely valuable and profoundly loved, no matter our sexual past, present, or future.

I’m still thinking through the rest of it, and would welcome the perspectives of others on this, but I think an alternative is to move away from equating virginity with sexual wholeness (and therefore something that can be lost or given or taken away in a single moment) and instead focus on the path of holiness. Holiness, to me, means committing every area of my life— from sex, to food, to time, to work—to the lordship of Jesus. It means asking how I might love God and love my neighbors in those areas so that the Spirit can grow love, joy, peace, patience, kindness, goodness, faithfulness, gentleness, and self-control in the sacred soil of everyday life. So holiness can’t be reduced to a single decision or sex act, and it can’t be rendered into a list of rules. It’s a way of life, filled with twists and turns, mistakes and growth, uncertainty and reward.

As far as the virgin/whore dichotomy, that’s just another example of the tendency to label, categorize, manage, and “other” women, to define them based on their perceived sexual value. So it all goes back to treating women as human, like Jesus did, recognizing that they are created in the image of God, co-heirs of the Kingdom, and co-workers in Kingdom work. I think it’s interesting that, in the Gospels, it’s the Pharisees (and sometimes the disciples) who tend to refer to women as “prostitutes, ” “sinners, ” and “whores.” Jesus preferred the terms “daughter” and “disciple.”

Perhaps it is no wonder that the women were first at the Cradle and last at the Cross. They had never known a man like this Man—there never has been such another. A prophet and teacher who never nagged at them, never flattered or coaxed or patronized; who never made arch jokes about them, never treated them either as ‘The women, God help us!’ or “The ladies, God bless them!’; who rebuked without querulousness and praised without condescension; who took their questions and arguments seriously; who never mapped out their sphere for them, never urged them to be feminine or jeered at them for being female; who had no axe to grind and no uneasy male dignity to defend; who took them as he found them and was completely unselfconscious. There is no act, no sermon, no parable in the whole Gospel that borrows its pungency from female perversity; nobody could possibly guess from the words and Jesus that there was anything ‘funny’ about woman’s nature. But we might easily deduce it from His contemporaries, and from His prophets before Him, and from His Church to this day. Women are not human; nobody shall persuade that they are human; let them say what they like, we will not believe, though One rose from the dead.”