Like many RLC readers, blogger Sarah Bessey believes in the full inclusion of women in the life of the church. Because many women around the globe are not yet fully included as valued leaders, her new book, Jesus Feminist, invites the whole Church to live into God’s redemptive purposes.

Sarah, where were you raised, and how was gender navigated in your childhood home?

I was raised in western Canada, primarily in the prairies. We kept going further and further west and now we’re settled on the British Columbia coast between the ocean and the mountains. I’m a true western Canadian kid, right down to my distrust of authority and the establishment. My family was post-gender debate in many ways and I grew up in an egalitarian home with strong and loving parents who loved Jesus with their whole hearts. We attended small churches in Canada where women and men were equally active in ministry. I cherish my place as an outsider to a lot of American evangelicalism for several reasons, but one of them is that my experience as a woman in the church and in a Christian home has been overwhelmingly positive and affirming.

As a result, I see Jesus Feminist in some ways as an invitation to the life waiting on the other side of our Church’s gender debates. I am post-gender debates: these issues have been settled for so long in my story that I want to tell about how God is moving and transforming out here in the freedom of equality, what life looks like “on the other side.”

If this thing is a done deal for you, how did you come to engage with the struggles of women around the globe?

In my late teens and early twenties, I became more actively engaged in women’s issues within evangelicalism as I wrestled with my own faith. I became active in work and ministry with young women in particular. These encounters lead me to a more global awareness and advocacy of women’s issues in the world.

But honestly, it started off with listening to other women’s stories. I’ve been fortunate to know many brave world-changing women. Once you see what freedom and equality and wholeness looks like, it’s impossible to forget. It’s a glimpse of the Kingdom of God.

Sarah, tell us what’s made you particularly passionate about the full inclusion of women in the church?

I know it sounds like a cop-out answer, but for me, it’s true. I get into it a bit more in the book, but after a season of my life spent wandering, I emerged from a spiritual wilderness crazy about Jesus. I poured over the Gospels, and decided that I wanted to follow this man for the rest of my life, wherever he took me. I learned about the Kingdom of God, I learned to look at my life and even the world through the lens of Jesus’ life, ministry, and teachings. And as I became more active in women’s issues, I began to see specifically how Jesus interacted with women in the Gospels. It was revolutionary. It was profound. It was just plain normal. And I loved it. Jesus thought women were people, too, and at that point, I decided that I wanted to be a feminist in the way that Jesus would be a feminist.

When I say “Jesus made a feminist out of me” it also means that Jesus shapes my feminism, rather than the other way around. When I decided to become a disciple of Jesus, it meant that I wanted to live into my right-now life the way I believed Jesus would do it – that included my passion for and advocacy for women’s voices and experiences, healing and justice. It’s precisely because I follow Jesus that I want to see God’s redemptive movement for women arch towards justice.

There are so many other experiences and encounters that have solidified that passion: my work with Mercy Ministries, my experiences in church, marriage, motherhood, my friends and church communities, my connections with global communities through friendship, all of it. I’ve been fortunate to be part of a great cloud of witnesses and storytellers and rabble-rousers and preachers who love Jesus and dare to imagine the Kingdom of God on earth.

So although the label wasn’t being tossed around in the 1st century, what do you recognize in the Gospels that makes Jesus something of what we’d identify as a feminist today?

I define feminism as the simple belief that women are people, too. 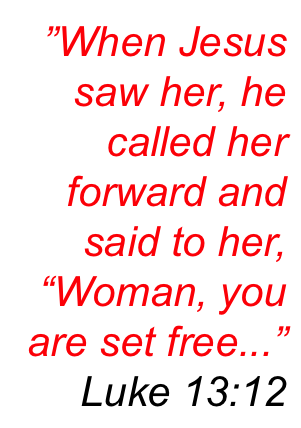 At the core, feminism simply means that we champion the dignity, rights, responsibilities, and glories of women as equal in importance to those of men, and we refuse discrimination against women. That’s it. And when I spent those years reading the Gospels and learning to shape my life into the life of a disciple, I saw that exact belief manifested in Christ. The women of Gospel narratives ministered to Jesus, and they ministered with him. Women were simply there – sometimes unnamed, sometimes in the background, sometimes the focus, sometimes the receiver, other times as the giver – just like every other man in Scripture, they were engaged on their own merit in the midst of their own stories. Jesus thought women were people, too, and – crazy beauty of it! – he acted like it.

Your book has been called a love letter to the church. If you had twenty seconds to summarize that letter, what do you want the church to hear?

You are loved and you are free. May we move with God’s redemptive purposes to rescue, restore, and redeem humanity. And may we, as the Church, prophecy the Kingdom of God with our very lives.