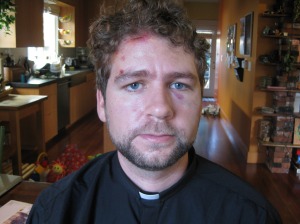 Amid the recent police violence in Oakland and the sure temptation of some protestors to resort to violence, I wrote this little reflection inviting all Occupiers to a renewed commitment to nonviolence.

There is a verse in the Bible that says, “Our battle is not against flesh and blood but against the principalities and powers of this dark world.”  It is a reminder that there are people behind oppressive structures — people who laugh and cry and bleed just like everyone else –- and those people are not the enemies, but the systems are.

I was reminded of this when I went into Bank of America on Move Your Money Day, and transferred my money to the non-profit credit union here in Philadelphia.  As I went into the bank, I saw the smiling faces of Bank of America tellers who have become friends over the past decade.  When I told them I was closing my account, one of the women asked jokingly, “You don’t like us anymore?”  At first my heart sunk, but then I said, “No way, I love the heck out of all of you.  I just don’t like the values of the bank you work for.”  To my surprise, they all smiled.  In fact they may not like the values of the bank they work for either.  Even though I’ll be leaving Bank of America, I’m hoping to stay in touch with my friends there.  I may even take them some coffees next week, which I’ll charge on my new credit union debit card.

Read & Watch: Shane asks – Is There Such Thing as a Good CEO?

But as a Christian, I have a strange model for interacting with violence – the cross.  During his state-sanctioned execution, Jesus looked into the faces of those about to kill him and prayed, “Father, forgive them for they don’t know what they are doing.”  The enemy-love exemplified by Jesus on the cross is so counter-cultural that the bible says that it is “foolishness” to the wisdom of the world.  It makes no sense to the logic of “smart” bombs nor the sort of justice that says “eye for an eye, tooth for a tooth, shock and awe for a September 11th”.  But what Jesus did on the cross was expose injustice – he made a spectacle of it as he endured some of the ugliest stuff people can do to each other.  And he triumphed over violence with nonviolent love.  Some theologians have called it: revolutionary subordination.

Jesus shows us that it is possible to overcame evil without mirroring it… to resist oppressors without emulating them, to neutralize enemies without destroying them.

Jesus (and MLK and Gandhi and others) abhorred passivity and violence – but they also knew they were fighting a something bigger than people.

Over and over throughout history, folks have discovered this power of nonviolence.    Martin Luther King insisted that the best way to expose injustice was to suffer nonviolently, so that we “make injustice so uncomfortable that it has to be dealt with.”  Nonviolence unmasks injustice in a way violent resistance cannot.  There’s something in us that can’t stand to see an unarmed, peaceful person beat up. Something in us winces, stands with the underdog.  The universe bends towards justice.

Like Jesus, Dr. King knew that his battle was not against people, but against the principalities and powers that colonized people’s imaginations.  He wanted to liberate both the oppressed and the oppressors.

Read – Shane’s latest on an Exorcism of Wall Street

How will history remember the Occupy movement?

I am convinced its future will be determined by its humility and nonviolent commitment, even in the face of violence and ugliness from the other side… especially in the face of such violence.

And the other side can be brutal.  Just take a look at this priest who was attacked by police at a nonviolent protest.

When most people see nonviolent protestors like this priest beaten up by police, it conjures up similar feelings to those of the Civil Rights movement.  It exposes injustice and puts the system on display.

The Occupy movement succeeded in getting the world to notice the 99%, and they did that largely by dedicated sacrifice – sleeping out night after night in rain, cold, snow, going to jail, getting tear-gassed and ridiculed — and responding with nonviolence.

It will not just be arguments that win the hearts and minds of people to the movement, but it will be sacrificial love like that characterized Jesus and Dr. King… and much of the Occupy movement to date.

What caught the world’s attention was the sacrificial commitment of hundreds all over the world on behalf of the 99%.  What will keep the world’s attention is a renewed desire to expose injustice without mirroring it.  I am hopeful.  After all, nonviolent movements have a good track record for changing the world.

The only way to maintain that sort of nonviolence is to constantly remember that the battle is not against flesh and blood but principalities and powers.  That is a true revolution – when we can insist that the disparity between the 1% and the 99% is the greatest moral failure of our age while also insisting that every person, 100% matter – and that no one is beyond redemption… let’s set both the occupied and the occupiers free.