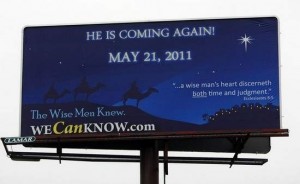 Does wrongly predicting the end of the world ever get old? Seriously.

The latest prediction, which has been swirling around for a bit now, states that the rapture will take place on May 21 of THIS year! No time for shenanigans, this is imminent.

If you’re anything like me at some point this has to start getting to you. With stories circulating around the web and even finding their way onto network news I can’t help but want to scream. Literally. In my life time I have seen the world “come to an end” multiple times.

I recently read an article about a beautiful young lady who decided, given her grim circumstances with the earths imminent demise, that rather than start a family following her service in the Army that she would instead spend her final five months traveling around the country preaching that folks do not have much time left.

Although the Second Coming is a certainty – Christ will return, and the kingdoms of this world will then become the kingdom of our God – Jesus himself said that it is futile to pinpoint its precise date (See Matthew 24:34-42).

Yet Christians have spent the last 2, 000 years guessing at the specific date of the Second Coming. Beginning with early Christians who thought that Christ would return before John died (they used John 21:22-23 as their basis for this) and continuing through our current day it is evident that Christians have never stopped date guessing.

Today, fortunes have been amassed by Bible preachers from supposedly reading the signs of the times — signs that are usually recent and current events, particularly in the Middle East, events that supposedly must occur before the Second Coming itself.

Yet this reasoning, this interpretation runs counter to what Jesus said: everything that had to be fulfilled before the Second Coming would be fulfilled before his generation died out. Even Paul expected the return of Christ in his immediate future. Yet modern prophecy preachers imply that Paul didn’t understand the Scriptures as well as they do, and that of course Jesus could not have returned in the first century — not before any one of several events of the 20th and 21st centuries that prophecy preachers point to as prerequisites of the Second Coming.

Such an assumption is arrogant. I believe that Paul was not mistaken and that modern prophecy preachers are inflating current happenings in the world with a prophetic significance that is utterly unbiblical.

May 21, 2011 will come and go, just like every other ‘judgment day’ throughout our history. The only question is: what is the next ‘judgment day’ date?