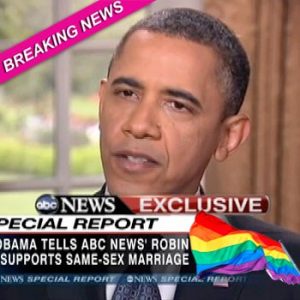 …because not quite enough has been said about this yet.

If you’ve read a news magazine, been online or watched CNN in the past week, you know that May 9 President Obama finally came out and declared he was for same-sex marriage – stirring the waters anew within the church regarding homosexuality, marriage, justice and Jesus.

My friend Tony Jones jumped on the opportunity to praise the president for ‘doing something so deeply Christian.’

My more conservative friend Daniel Fick had a (guest) blog post Monday entitled ‘The Golden Rule and Sexual Brokenness, ’ asking,  ‘But is the Golden Rule really helpful when it comes to the discussion of homosexuality, ‘gay marriage’ and social justice?’

But wait! There’s more. Bob Hyatt, another evangelical blogger, wrote an excellent post highlighting the intensity and tension present from both sides as we rethink the issues surrounding same sex marriage.

Here’s the quote from Obama that had many Christians cheering and many others bemoaning that this president considers himself a Christ follower ::

‘[My wife and I] are both practicing Christians and obviously this position may be considered to put us at odds with the views of others, but, you know, when we think about our faith, the thing at root that we think about is not only Christ sacrificing himself on our behalf, but it’s also the Golden Rule, you know :: treat others the way you would want to be treated.’

So here’s my two cents || We need to ask :: is it possible for the church to view same sex marriage as a justice issue and not merely as a moral/ethical issue?

In other words – whether you agree with or approve of gay sex and gay marriage or not (and yes – i believe the LGBT community needs to concede that the deep convictions of many Christians in their interpretation of scripture will not allow them, at this time, to approve in any way of same sex relationships) – is it possible to still be an advocate for same sex marriage on the basis of desiring for all people to be treated fairly,  regardless of whether their personal convictions are the same as mine or not?

I think it is.