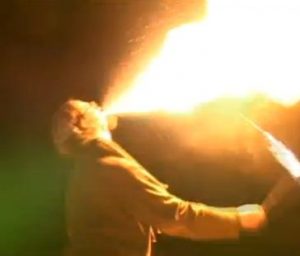 This past weekend Christians around the world celebrated one of our holiest holi- days – Pentecost.  Pentecost meaning “fifty days” is celebrated seven weeks after Easter (hence the 50), and marks the birthday of the Church when the Holy Spirit is said to have fallen on the early Christian community like fire from the heavens (for this reason lots of Christians wear red and decorate in pyro-colors, and it’s also where the fiery Pentecostal movement draws its name).

But what does Pentecost Sunday have to do with just another manic Monday?

What does a religious event a couple of thousand years old have to offer the contemporary pluralistic, post-Christian world we live in?  I’d say – a whole lot.  Here’s why.

Let me start by confessing my bias… not only am I a Christian.  I am a Christian who likes fire.  I went to circus school and became a fire-swallowing,  fire-breathing, torch-juggling-pyro-maniac as you’ll see below.  So naturally, I like Pentecost.

But, what happened at Pentecost runs much deeper than fire and wasn’t just about speaking in a charismatic “tongues-of-fire” prayer language, as beautiful as both of these may be.

One of the things that happened at Pentecost was a really diverse group of people understood each other, as the Spirit of God fell upon them.  It was a divine moment of reconciliation among people from many different tribes and nations and languages – a reconciliation moment I would say the world is desperately in need of today.

To understand what happened at Pentecost, we need to look back to the legendary story of the Tower of Babel – as it sort of paints the backdrop.  After all, Babel is where we derived our 6000+ spoken languages, according to the Bible.   You may remember the old Babel story from Sunday school, or you may have some Bob Marley tunes ringing in your ears about the fall of Babylon, the region around where the tower fell.  Here’s a brief synopsis.  The story begins by saying, “the whole earth spoke one language” (Gen 11:1). The young human species seemed quite impressed with itself and its limitless power, so the people set out to build a tower to heaven.  It doesn’t seem so terrible in itself, but the Scripture speaks of the tower as an idol of human ingenuity, which they built “to make a name for themselves.”

God was not impressed.  As the story goes, God topples the tower and scatters the people… humbling them, bringing them back down to earth.   And here’s an important detail – as they were scattered across the earth, God confuses them by having them speak many languages rather than one (it’s also said this is where we get the word “babble”).  This story becomes a central commentary about power.  In fact the Bible ends with the “fall of Babylon, ” the quintessential symbol of imperial power and the counterfeit splendor of the world.

But here’s why Babel is an important backdrop for what happens at Pentecost.  Pentecost is the anti-thesis of the Babel project.  According to the book of Acts (chapter 2), during that original Pentecost some 2000 years ago, there were people from “every nation under heaven” gathered together.  The author even goes on to specifically name over a dozen geographical places, large and small, Jewish and non-Jewish, rural and urban, from which people came.  They represented the whole earth.

Then the Spirit comes upon them.

And here’s what happens next – even though they all spoke different languages, they understood each other.  The text says that the folks doing most of the speaking were “Galileans” but everyone heard what the Galileans said in their “own language, ” their native tongues (Acts 2:6).

I heard some scholars point out that “Galilean” was shorthand for backwoods folks from the hills – they had a strange accent and spoke in a really distinct dialect.  As a TN hillbilly, I sort of like that the preachers that first Pentecost were country folk… not that God has a southern accent…  But Galileans were frowned upon by many and seen as unsophisticated, uneducated, uncivilized — and for this reason folks were stunned that Jesus came from Galilee where folks thought “nothing good could come”  (John 1:46).

But regardless of whether the preachers spoke with a country twang or British flair…. or Swahili or Bengali or Arabic or Japanese, the point is — They all understood what was being said as if it was being spoken in their own language.

They are the opposite of the one-language, tower-building Babel project.  At Babel, God scattered the pretentious human race.  And at Pentecost, God reunites the scattered people into a new beloved community – made one, not by their own hands or by a shared single language, but by the Spirit of God.

They are the new sign of God’s Spirit – a community that is as diverse as creation itself, as unique as the fingerprints we leave and the DNA we’re made of.  But it is a community that understands each other amid our diversity, each as children of God.

I heard a rabbi say that it is the nature of the empire to create sameness – like coins and buildings and houses that all look just the same.  But if uniformity is the imperial brand, diversity is the mark of God’s creation.

Certainly, the contemporary Church still has much work to do when it comes to reconciliation.

At Pentecost we are reminded that we can be diverse but still be of “one heart and mind” through the Spirit of God.  And unity does not mean uniformity.  To harmonize does not mean we homogenize.  In fact any good harmony has lots of different voices, just like that early Church.

What’s just as important as Pentecost is what happened after Pentecost.  The early Christians started sharing everything they had. Former enemies became friends Folks laid down their swords and picked up a cross. The book of Acts goes on to say “There were no needy persons among them” (Acts 4:34), for whenever they carried the burdens of one another and shared their possessions with open hands.  One of the signs of the birthday of the Church was they ended poverty through a radical community of selfless love and reckless abandonment of possessions.  They were a community of reconciliation where “there is neither Jew nor Greek, slave nor free, male nor female” – but all are made one in and through Jesus (Galatians 3:28).  They were a new Family, with a big F.

In a world riddled with violence and racism and hatred, the Pentecostal vision seems to invite us not to settle for the world as it is but to dream of the world as it could be… as it should be.   Even in the Church, we still feel the legacy of racism and division, the incompleteness of the vision of that early Church. As Dr. King once said, “The most segregated hour in the world is eleven o’clock on Sunday morning.”  But Pentecost teaches us about a God who is restoring broken relationships and healing the wounds of racism and segregation.

Inspired by a vision of reconciliation and diversity, a bunch friends around the world will be launching an ambitious new movement this week called “Friends Without Borders” (www.friendswithoutborders.net).  I can’t imagine a much better way to bring the Spirit of Pentecost Sunday to my workday on Monday.  It is our hope to create a network of friends around the world who are convinced that the things we have in common are more powerful than the things that tear us apart.  It is an invitation to Christians and Muslims, to people of all faiths and no faith – to start a friendship that can move the world towards peace.