Click here to read first two posts in this series.

At Brown Chapel AME in Selma, Alabama, Brother Joe walks us through the story of how this church in the heart of the African-American community became a staging ground for the famous Selma to Montgomery March, which raised the franchise to national attention before the Voting Rights Act of 1965. It is not the story of a visionary strategic plan, but rather one of a community that had struggled to be faithful to the gospel, deciding to open its doors after other churches had taken the courageous step before them—and borne the consequences. The Dallas County Voting League, shepherded by Ms. Amelia Boynton, identified the crucial objective: political power through participation in the democratic process. SNCC came to town to support local efforts to register black voters. When they needed a place to meet, Brown Chapel said yes. This sanctuary became a place where everyday people put faith into action.

A veteran of SNCC, Dr. Bob Zellner, is with us on this ride. He fills in Brother Joe’s story with recollections of his own visits to Selma in the early sixties. And after our freedom riders have had a chance to ask questions, brother Bob asks a question of his own: might we circle up at the alter and sing a few songs? This room was built for singing, and as we stand, arm over arm, finding the harmonies in “We Shall Overcome, ” I realize that this is a picture of what we’ve learned about the role of the church in freedom movements. This song, born and bred in the church’s bosom, found its work out in the world, giving courage to marchers on the Edmond Pettus Bridge, in the streets of Soweto, at Tiananmen Square. Still, it is at home here, tying the freedom movement we’ve been discussing into the worship life of this congregation. 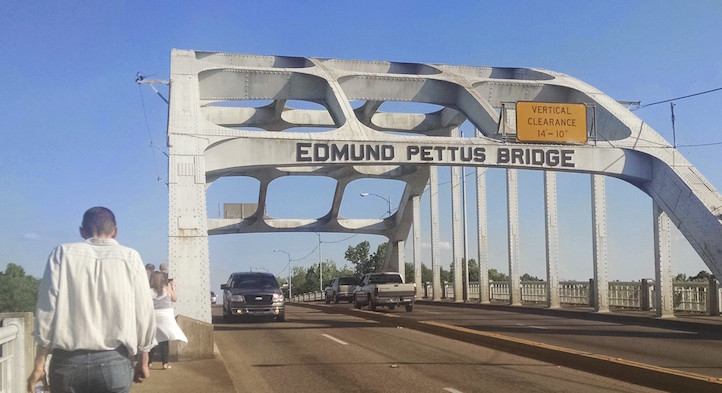 Maybe the story of a song can teach us something about vocation. From the Latin “vocare, ” this way of understanding the life we were made for is rooted in the notion that God calls—beckoning us first into his church, a beloved community in the world, and then sending us out to be about the work of building up a new world right here in the wreckage of the old.

Of late, “the church” as we have understood it in the West has been anxious about a lag in vocations. Fewer people are joining the institutions; fewer still hear a call to lead them. But if a life is like a freedom song—if there is a seemless connection between God’s revolution inside the church house and on the streets—then maybe our present situation is not as dire as it seems. Maybe the young people chanting “Black Lives Matter” and the workers shutting down streets in their Fight for 15 are a flock in search of its Shepherd, a song trying to find its way home.

If so, this ride toward freedom isn’t simply an exploration of how faith and politics intersect in the story of American democracy. It is, I begin to realize, also an invitation to reimagine what we call “church.” Maybe the Spirit is stirring in the streets to teach us something about what it means to become the community through which God is saving the world.