I’ve written two posts now focused on my own story and the things I’ve seen. I think it’s pretty clear how passionate and compassionate I am about helping those in need. However, lest you think I’m deluded, wearing rose colored glasses, romanticizing poverty, or ignorant of the way things work, let’s talk about poverty and its domineering abusive parent, power.

Poverty is much broader than lack of financial resources. The lack of financial resources (e.g. delinquent on rent, no food in the kitchen) is most often a symptom of a much deeper problem. When we address a symptom instead of the underlying problem, we can worsen a person’s situation over the long run. It’s like slapping a band-aid and some triple antibiotic ointment on gangrene. You don’t actually remove the gangrene, and they lose their foot.

Before we can decide on the best way to help someone, we need to get to know them. We need to uncover the many twists and turns that led them to where they are. We need to understand the systems in place and how those systems are encouraging or discouraging them from working their way out of poverty. We need to find out what they think “better” would be, and what they are willing to do to get there. And then we have to figure out what to do when we have completely different goals or completely different definitions for “better.”

Most middle class Americans would define “better” for someone on government assistance as “becoming self-sufficient.” In fact, they would consider the ability to support oneself without assistance to be a bare minimum goal.

Related: In God We (Don’t) Trust – by Stephen Mattson

However, take some time to get to know people on government assistance (who are by definition not self-sufficient), and you’ll discover very quickly that some of them do not wantto be self-sufficient. Self-sufficiency is hard work. They don’t care that they spend their days on a ragged-out couch in a broken-down trailer with nothing to do but stare at the television all day. The government sends them a check and food stamps every month, so they’ve got it made! They look at us poor bastards running the rat race every day and think we’re pretty stupid. Why would we want to work that hard when we don’t have to?

Why is that? I’m glad you asked. The disrespect of work, the inability to take pride in a job well done, and the distrust of everyone has roots in history. It’s been handed down from generation to generation. Children grow up receiving government checks and have no concept of going to work every day to receive a paycheck.

I watched the documentary “The Wild and Wonderful Whites of West Virginia” a couple of weeks ago. (This is an unrated movie containing language, drug and alcohol abuse, and violence. It’s very dark.) It follows the notorious White family for several months, showing how they live and delving into why.

One of the things that leapt out at me from their story is the way the coal mining culture sowed the seeds of the Whites’ destructive lifestyle three generations ago. They set up a system of compensation that enabled them to brutally exploit their workers. Employees developed bone-deep distrust of power, which they passed down to their descendants. Instead of rewarding hard work, this exploitation taught people to cheat. Families like the Whites learned that if they didn’t work the system, the system would work them. 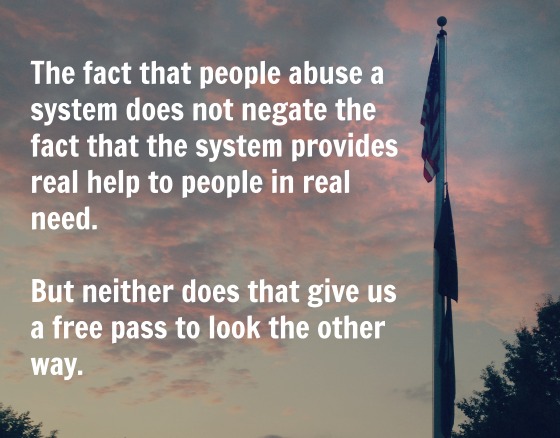 This pales in comparison to our country’s national history of exploiting minorities. Kidnapping, buying, selling, enslaving, and tearing apart African families, displacing Native Americans and buying them off with alcohol and chotchkies, for the purpose of making a little more money? This is the same thing the coal mining companies engaged in, only on a massive national and international scale, and it has reaped the same devastating consequences on generations of minorities.

How about a little closer to home? In my state, people make a vocation out of giving and getting a diagnosis that qualifies them for long-term disability. Dishonest doctors sell contrived diagnoses to individuals who then use the paperwork to qualify for disability benefits. My state can’t afford to pay all those benefits, so rather than purge the system, the state moves people from the state-funded disability rolls to federally-funded Supplemental Social Security Income (SSI).

Also by Joy: How a Conservative Christian Home-School Graduate Became a Bleeding-Heart Liberal

I don’t know what to do with all this. I want to wring my hands and wear sackcloth and ashes. Maybe national mourning is an essential step towards healing. I don’t know.

What I do know is this: the fact that thousands of people abuse a system does not negate the real help it provides to people in real need. But neither does that give us a free pass to look the other way.

Power corrupts. People cannot be trusted, not those at the top and not those at the bottom. The systems in our country are manipulated to serve their own interests by those with money and power as well those without. We cannot hope to alleviate poverty, increase self-sufficiency, and teach people how to function in the middle class and work hard without also reforming our corrupt exploitive self-interested  power structures. In opting for free market capitalism and de-regulation, we have disastrously underestimated the power of greed. We trusted too much in the innate goodness of mankind, mistakenly believing we are capable of building a healthy and fair economy with only capitalism to keep the greedy powerful in check.