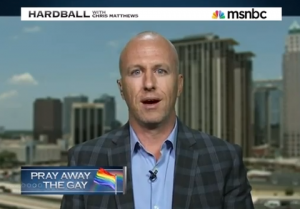 Late last week, Paul Burkhart jumped into the fray of online conversation surrounding Alan Chambers and Exodus International’s recent significant change in philosophy regarding ‘reparative therapy.’ On my personal site, today’s post will highlight some of his insightful commentary and what I called ‘a clear, balanced and transparent voice in the midst of this conversation where so many others are simply shouting past one another.’ It’s rather refreshing.

You see: this past week, nearly everybody was talking about it.

Scot McKnight called the shift ‘colossal.’ Not surprisingly, I said some things about it.  NPR.org ran a segment on All Things Considered about how much Evangelicals were fighting amongst themselves about homosexuality, highlighting Alan’s story.

Denny Burke’s readers had a lively discussion about the changes and Robert Gagnon called on Alan to resign from his position at Exodus.  Groups like the Ex-Gay Watch hammered Alan and Exodus on being vague with the change, in spite of multiple interviews with print and other media that Alan took while on vacation with his family.

Christianity Today ran an article on the theological disputes the controversy has stirred up. The NY Times featured the story.  Even Fox News got in on the action, tying the change in Exodus International’s philosophy to the upcoming vote in Minnesota on same sex marriage. MSNBC invited Alan Chambers onto Hardball with Chris Matthews.

Visit NBCNews.com for breaking news, world news, and news about the economy

In short, this thing blew up.

The last time the church’s dirty laundry got aired with this type of excitement was in 2011 when Rob Bell was just about to release a book and let this teaser trailer slip:

That three minute clip unleashed a slew of blog posts prior to the book’s release by people who hadn’t yet read it declaring that Rob Bell was a heretic (I don’t believe he is), claiming that he doesn’t believe in hell (he said in the book he does) and prominent church leaders tweeting dismissive and final things like, ‘Farewell, Rob Bell.‘ Rob ended up on the news, too.

Interestingly, the same week all of Christendom was abuzz about whether or not Rob Bell is a universalist (which he said he isn’t), a devastating 9.0 earthquake and tsunami hit japan, killing over 25, 000 people and injuring some 10, 000.

But we wanted to talk about hell.

And it seems, in the midst of worldwide pain and heartache in recent weeks – the Colorado fires, the Penn State abuse report, the Syrian massacres, oil tanker crashes, unrest in the China Seas or even Kobe lipping off about the dream team, that the Church of Jesus Christ would have plenty to not only talk about, but plenty in which we have an opportunity to participate with God in his redemptive plan for the reconciliation of all things.

I wonder — if the Jesus we claim to follow were visibly walking with us today, where would he be leading humanity?  Probably not into the ring to fight each other over this issue.

I think it may be time to hang up the gloves on this one, folks.  This fight is getting old.