Most of us have now heard about the most recent school shooting at Santa Fe High School in Texas. It’s the third school shooting this week, the 22nd this year. At least 10 are dead, making it the most deadly since Parkland.

Earlier this week, there was a double murder about a mile from my house, a reminder that gun violence is not a distant issue to debate but an urgent crisis in our country. That same day a gun shop was robbed and 24 guns were stolen… a reminder that 80 guns disappear every day from gun shops, 30,000 a year and another 500,000 are stolen from other places like homes and cars.  We have a problem.

We have five times more gun dealers than McDonald’s restaurants. We have a crisis, a public health crisis in America. More people have been killed domestically by guns in two decades than in all of the wars we’ve fought in 250 years.

Now we will hear politicians offer their thoughts and prayers for the victims in Texas. I’m reminded of the poignant words of theologian Miroslav Volf: “There is something deeply hypocritical about praying for a problem that you are unwilling to resolve.”

We must insist that losing 90 lives a day to guns — more than 33,000 per year —  does not have to be normal. We don’t have to live this way. This is not okay. And we can do something about it.

Some people say that what we have is a heart problem, not a gun problem. We must insist that it is both — a gun and a heart problem. God heals hearts. And we can change laws to protect lives.

This week hundreds of us prayed with our feet in an event called “Demand the Ban.” We took a donated AR-15 assault rifle, heated it up in the forge, and beat it into a garden tool. It was a beautiful enactment of the prophetic vision of Isaiah that God’s people will “beat their swords into plows and their spears into pruning hooks.” In fact, we had that verse on the back of our shirts during the rally.

My sister @movitajh holding the plow we made from an AR-15. Her son was killed by an assault weapon. #DemandTheBan pic.twitter.com/MWy9cv4uJa

Then we delivered the tool to Senator Toomey, urging him to sign the bill before Congress now that would ban military-style weapons from being on our streets. We decided we would not leave until he agreed to stand up for life on this issue, or until we were arrested. Thirty-three of us, including many pastors and faith leaders, were eventually arrested. It may very well be one of the largest acts of civil disobedience to date in the movement to end gun violence. And many of the police thanked us for taking action in the way we did. After all, their lives are at stake too. 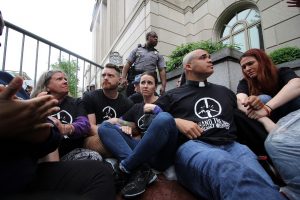 Assault rifles like the AR-15 are designed to kill as many people as possible, as quickly as possible… and that’s exactly what they are being used for. They are the weapon of choice in mass shootings. The AR-15 was used in Aurora, Sandy Hook, San Bernardino, Umpqua Community College, and in the recent shootings in Orlando, Las Vegas, Sutherland Springs church, and Parkland… and the Waffle House in Nashville.

We have to turn thoughts and prayers into action.

A part of loving our neighbor means caring about the policies that affect my neighbor. Gun violence is one of those, so is immigration. These issues are also a part of what it means to be pro-life. Abortion is not the only life issue. If you consider yourself pro-life but are not concerned about the epidemic of gun violence, you might just be anti-abortion or pro-birth. America may be the only place in the world where you can be pro-guns, pro-death-penalty, pro-war… and still claim to be pro-life. We have so narrowly defined what it means to be pro-life to one issue. Gun violence, capital punishment, immigration, war, and racism are all pro-life issues. Let’s stand up for life — from the womb to the tomb.

We can’t stop all killing, but we can stop some killing… if we are willing. And as a pro-life Christian, that matters to me. Every lost life matters to God — including all of those who died yesterday in Santa Fe High School. Let us pray for the victims, and then let us honor their lives by taking action to end gun violence in America.