Letters to a Young Evangelical

HomeBooksLetters to a Young Evangelical 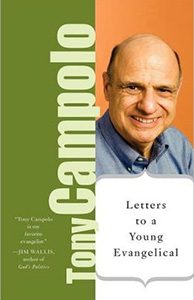 Named by Christianity Today as one of the most influential preachers of the last 50 years, best-selling author Tony Campolo has spent decades calling on readers and audiences around the world to live their faith through committed activism. In Letters to a Young Evangelical, Campolo enjoins evangelicals young and old to resist the intimidating rhetoric of the Religious Right and think for themselves. With his trademark candor and wit, he offers sage advice to seekers who are trying to live their faith in a modern world that is politically polarized and predominantly secular. He is unafraid to touch on hot-button topics including abortion, gay marriage, the war in Iraq, women in the ministry, and relations between Christianity and Islam. An activist, a visionary, and a man of deep faith, Tony Campolo offers guidance not only for young evangelicals, but also for seekers of all ages and faiths.