Partly Right: Learning from the Critics of Christianity

HomeBooksPartly Right: Learning from the Critics of Christianity 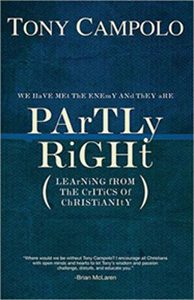 Marx…Kierkegaard…Nietzsche…Freud…If we do not learn from them, it may be at our own peril. In Partly Right, Dr. Campolo explores the background and claims of the major critics of bourgeois Christianity from the late 19th and early 20th centuries. Stepping into the roles of these intellectuals, he argues their points, their views, and their complaints about the middle-class societies spawned by Protestantism.

Campolo clearly and rationally shows both pros and cons of the critic’s theories. As Christians, we should be aware not only of their misconceptions, but also of their truths. Campolo says, “Middle-class Christianity shows no signs of dying. This book is designed to analyze the criticisms of its enemies, test their validity, and explain why bourgeois religion has survived them.”

Be the first to review “Partly Right: Learning from the Critics of Christianity” Cancel reply