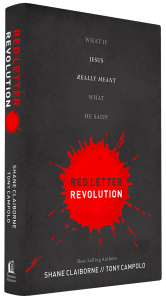 By Shane Claiborne and Tony Campolo

For all the Christians facing conflict between Jesus’ words and their own lives, for all the non-Christians who feel they rarely see Jesus’ commands reflected in the choices of his followers, Red Letter Revolution is a blueprint for a new kind of Christianity, one consciously centered on the words of Jesus, the Bible’s “red letters.”

Framed as a captivating dialogue between Shane Claiborne, a progressive young evangelical, and Tony Campolo, a seasoned pastor and professor of sociology, Red Letter Revolution is a life-altering manifesto for skeptics and Christians alike. It is a call to a lifestyle that considers first and foremost Jesus’ explicit, liberating message of sacrificial love.

Shane and Tony candidly bring the words of Jesus to bear on contemporary issues of violence, community, Islam, hell, sexuality, civil disobedience, and 20 other critical topics for people of faith and conscience today. The resulting conversations reveal the striking truth that Christians guided unequivocally by the words of Jesus will frequently reach conclusions utterly contrary to those of mainstream evangelical Christianity.

If the Jesus who speaks to you through the Gospels is at odds with the Christian culture you know, if you have ever wanted to stand up and say, “I love Jesus, but that’s not me,” Red Letter Revolution will prove that you are not alone, but you may have been a Red Letter Christian all along.

Be the first to review “Red Letter Revolution” Cancel reply