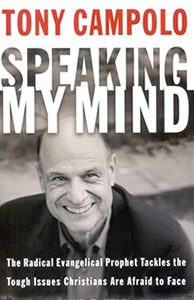 Fifteen years ago, Tony Campolo’s 20 Hot Potatoes That Christians Are Afraid to Touch pushed, pulled, and prodded Christians into serious consideration of controversial but critical issues related to the Christian life. Campolo challenged his more than 150,000 readers to rethink their convictions (and prejudices) and to do something about them!

Dubbed by Christianity Today as “the positive prophet” and “a ferocious critic of Christians left and right,” Campolo lives up to his reputation in this latest book examining some of today’s toughest questions and issues:

Be the first to review “Speaking My Mind” Cancel reply