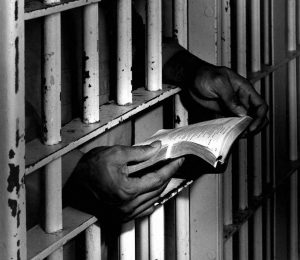 Live your questions now, and perhaps even without knowing it, you will live along some distant day into your answers. -Rainer Maria Rilke

What question would you ask God? I was naive enough to raise that question in my class at the county jail. These guys; felons, addicts, forty year old high school drop-outs, had some remarkable insights about who a believable god should be – and what He should be able to do – and how – or whether – it mattered that anything like God existed. Dinosaurs, injustice, seemingly unfair or exploitive actions by others – especially adults toward children – and why it was so much easier to be bad than to be good.

We talked through these issues. Sometimes we had revelations – sometimes not. We all had stories, memories and regrets. In this numbing atmosphere the concrete walls, absence of windows, glaring florescent lights and brittle plastic chairs ensured that every sense was assaulted. It was as if every aspect of being human was nullified. Every inmate wore an ill-fitting jumpsuit with pink slip-on rubber sandals. Every guard wore at least one gun, several sets of handcuffs and various radios and security equipment. The inmates were moved in groups of about eight – all manacled together by a string of handcuffs on a long heavy chain. They moved like an ancient, tottering, gigantic multi-legged insect making its way to extinction in its awkward, clanging clumsiness.

Their eyes, furtive and downcast, told it all: theirs was a world of shadows and brokenness beyond description. Their destiny, so it seemed to them, was as rigid and unyielding as the chains that hung like festering wounds – and not just on their bodies.

Even in that confined and dehumanizing place, surrounded by guns, stocky and dour guards, this place, in its calcified and brutal sterility was something like holy ground as we, sinners in need with fewer options and less hope by the day, somehow grappled with the idea, as absurd as it seemed at the time, that there was purpose for all this, that there was a God, a God who mattered; a God in whose eyes we mattered.

There were times, a few times, when I hated to leave that desperate discussion, where the stakes were high, the sins had been great, but the forgiveness even greater. When grace was almost tangible.

These guys, more than most of us ever will, knew, in a direct and personal way, the power of deception and the face of destruction and death. And they were getting a tiny splinter of the immense healing power of truth.

My job was to teach them two things – basic academics – like fractions and subject-verb agreement, and life skills. I started out with a focus on the academic side – it was easier for me, and I had all the books and worksheets. I quickly realized, however, that it wasn’t working. Each inmate was on a different level and it wasn’t what they really needed.

What they did need was some sort of framework to make sense of their lives. Some had been in and out of jail over thirty times – and had nowhere else to go. Nowhere else that was anything like home.

I left the worksheets behind and came into the jail with a large sheet of paper that I could stick to the bare wall and some markers. I had no lesson plan, no materials, no agenda. I took a big gulp and entered the jail with prayer and my blank sheet of paper. I asked the inmates what they needed to talk about.

To put it mildly, it was awkward at first. Most have these guys had been arrested multiple times, many had been to prison for years, there were murderers and rapists in there. I had never even had a traffic ticket.

Who knows how safe I was. I was required to carry a little PDA sized alarm thing with me whenever I entered the day-room. It didn’t make me feel even a tiny bit safer. To get into the so-called “God pod” where I taught, these guys had made some kind of “Christian” confession, but everyone: guards, chaplains and inmates, knew that many made that statement for the better conditions and increased freedom.

They were accustomed to grim do-gooders with a strict schedule – and an even stricter doctrine. The inmates were a captive audience to these purveyors of doctrine and shrill religion. There was a jail library of sorts filled with donated books that were screened by the chaplain. It was an odd mix of puerile religiously based self-help books, severe doctrine and paranoid apocalypse. In this sterile and confining space I posted my blank sheet and asked them what they wanted to talk about.

This was almost certainly my biggest step of faith. Or foolishness.

Yes, this was stupid alright. I, like these guys, couldn’t get out. I was literally against a wall – with my blank sheet of paper attached. And my mind was a blank as that piece of paper. They were accustomed to being lectured at – controlled and led around like animals.

I did little talking; I listened.

In that cold, clammy stultifying jail day-room, we talked of pain, betrayals and hopes for the future. This was no elevated theological discussion. This was a bare bones, take-no-prisoners, confrontation with any kind of truth that mattered.

These guys had seen the extremes of evil, sin and deception. They had no time for any feel-good theology. The self-help doctrinal books helped as far as they went – but they didn’t go very far.

After a few weeks of this, my jail classes became the highlight of my week.

What started out as foolishness became an exercise in grace. Unlike most good church-going people, the guys in jail had no problem acknowledging their sinfulness. There was a refreshing transparency about their public confessional. There was no denying their need for redemption. The “sinner’s prayer” was no abstraction.

I became more comfortable with their hard-won bare-knuckled approach to truth and God than with the safe and smug self-congratulatory religion I saw at work or church. I began to dread my re-entry into the cold-eyed world of schedules, slogans and easy answers. There was a brutal grace behind those bars…

After several months, the guys in the jail told me that I was the only one of all the teachers and preachers who didn’t use “god-talk” – the peculiar, condescending language many Christians use with all the sincerity of a bumper sticker, almost as punctuation every few words when spoken to those considered “lost.” These words always sounds tinny and fake. They are crass and insulting to those in need. Besides, Scripture asserts, and my personal experience confirms, that on any kind of eternal scale we are all far from even a passing grade. I, for one, glory in that massive discrepancy between our creator and His creation. How could it be any other way?

How ironic that Jesus, himself the living word (John 1:1) would be presented to the world at large in a series of clichés. How sad that the way we describe God, or how He is working in our lives seems to be reduced to a list of well-rehearsed canned slogans.

The living word in our hands becomes numbingly trivial – not inspiring and life changing.
Consider for example, some familiar Christian clichés:

These are pretty much factually true, but they reflect fatalism more than faith, jargon more than thought, and passivity more than hope. These statements might be “true” but they certainly don’t embody wisdom, grace or compassion. There is no reach, no transparency, no connection in those easy words. People in need, people who need answers, need words of solidity, of sacrifice, maybe even words fresh from their own pain. Words that have been wrenched from fierce and sometimes dreadful experience. Perhaps even words that have come from some unspeakable, indescribable mountaintop experience.

When we speak to someone we love, do we use routine and predictable phrases? Or do we draw on our deepest and richest feelings and use our own authentic, original and sometimes fierce (perhaps even desperate) language?

Don’t we usually prefer that people be honest with us? Doesn’t it seem reasonable that God would like us to be forthright and honest when speaking to – or about Him?

I found myself speaking to these inmates, these men of God in disguise, with a voice I had never heard from myself before. I spoke from my emptiness – and my fullness. There was a peculiar brotherhood there; a fraternity of Oneness. But it was a Oneness both confined and free, heavy and light, active and still. Broken and whole. Now and not yet.

It was as if I had moved into an unknown language. I was deep inside a building I had driven or walked by thousands of times, yet this place was as alien – and sparsely foreign – as any distant planet.

But in another sense, I was a visitor in an even more alien land – the landscape Jesus could visualize as he gave his first public message based on Isaiah 61

1 The Spirit of the Sovereign LORD is on me, because the LORD has anointed me to preach good news to the poor.
He has sent me to bind up the brokenhearted, to proclaim freedom for the captives and release from darkness for the prisoners, to proclaim the year of the LORD’s favor
and the day of vengeance of our God, to comfort all who mourn…and provide for those who grieve.

We spoke of God, and pain, and a hunger, a broken, ragged, edgy hunger for a better life.

I don’t know about the guys I left behind as I made my way back to my “normal” day’s work, but I walked out of there with an overriding sense of being hollowed out, yet filled, heavier, yet infinitely lighter; like a wounded healer, or a warrior who won, but had somehow forgotten that the battle was never really his, and would never live to see it finished, yet our words, burnished and seething, would never rest until their work was done. I, for one, would never see the world the same again. I had just a glimpse of the unlikely invasion of the divine into one of the dark and forgotten human corners most of us would rather avoid.

This was essentially the opposite of a mountain-top spiritual experience. This was more like plummeting into an abyss, like being immersed in the waters of creation as the holy spirit hovered over.

Jesus was derided for socializing with the wrong people, for eating with sinners. Yet what a blessing for those of us, sinners all, willing to eat and talk with those Jesus sends to us.