When the world was stopped in its tracks by this pandemic, COVID-19 exposed who really matters to our society.  As I lamented yet another link in the historical chain of disproportionate suffering for the Black community, an image came to mind and troubled me for days.  So much so that I had to put it on paper.  It turned into what feels like the most sacred piece of art I’ve created.

The art is a piece called Sacred Resilience; there is a glimpse of it in this video.  In the background of the art, I wanted to put a giant oak tree to represent the ancestors who lost their lives in the struggle for freedom and who stand as our great cloud of witnesses as we continue that struggle.  I began to draw that oak tree into the background from a photo I found online.

I did not realize until days later that the very tree I had drawn into this piece was not unlike one of the oldest living things in the nation:  The Angel Oak Tree in Charleston, South Carolina, estimated at 600 years old.  Charleston was the largest slave port in the United States during the Transatlantic Slave Trade; through which nearly every enslaved African entered U.S. soil.

The realization of what I had just unknowingly put onto paper brought me to my knees for days.  There is no human still alive to bear witness to the horrors endured during the slave trade (though countless endure the generational trauma).  Yet there is one living creature that was there for it all.  This is a tribute to the enduring struggle of intergenerational racial trauma and the extraordinary resilience that has accompanied it. 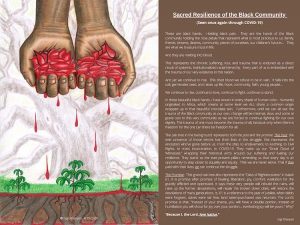