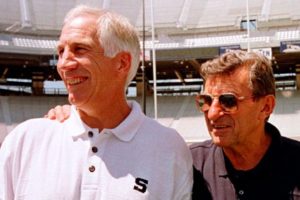 “A time comes when silence is betrayal.” — Martin Luther King

My heart is very heavy today as I read about the eight boys who were sexually assaulted by Gerald A. Sandusky in his home and in the locker rooms of the Penn State University campus. My soul deeply grieves to think that for more than 10 years the abuse was seen and known by others and overlooked.

I made myself read the Grand Jury report about Sandusky’s alleged crimes and it was 23 pages of vile and inhuman behavior not only by the predator but by those who actually saw it, heard of it, or received reports about it across their desk.

Then to also learn that all these children were black deepens my sadness.

I am forced to ask some really hard questions.

Are black people that expendable?

Was the fact that they were black, poor and powerless the reason it was overlooked?

Is football, a school, and personal reputation so important that a 10-year-old black boy being raped in a bathroom can be covered up?

I had an idea that power was corrupt, but this is much more than simply corrupt. It is pure evil.

If a black neighborhood or campus was behaving in this way, it would lead every news program show known to man.

That it wasn’t is further proof to the point that “Joe Pa” was bigger than life on that campus. The fact that he didn’t ask questions, that it never came up again as a concern for him or that he simply turned his head away, is a travesty.

I keep hearing that Joe Paterno did what was legally correct. Yet there was nothing morally correct about his actions and silence.

Another question that I have is this: What is the difference between what Gerald Sandusky, Joe Paterno, Joe Miller, a wrestling coach who walked in on him on the floor with a boy, Tim Curley, Gary Shultz, and Graham Spanier did from sex trafficking?

Would a business that allows kids to be trafficked in its back room get shut down and its owner be prosecuted?

Penn State allowed this shady business to happen in its “store” and it’s no different, is it? Oh yeah, it’s millions and millions of dollars and 61 years of coaching football versus only a few black boys.

If any African American man you know was seen in the shower naked with a 10-year-old white boy, it would not take more than 15 minutes for him to be arrested.

If any black man you know was talking to a white woman about being in the shower with her son and admitting to “lathering him up and giving him a bear hug” he would be in prison faster than you can say “prosecute.”

I am afraid to know what else goes unspoken and covered up by the powerful white men in our world who hold extreme power and influence.

What is covered up and who is expendable when money and power are threatened?

I am saddened today to know what can happen in our world.

I am saddened as well to see these families so victimized and the same laws that are supposed to protect them being used to protect people such as Paterno from being prosecuted.

Sandusky was arrested and charged, but his co-conspirators (and they surely are that) will go free to live their lives protected by the rule of Law.

Well, there is no moral law so I guess they just lose.

—-
Leroy Barber is President of Mission Year, a national urban initiative introducing 18-29 year olds to missional and communal living for one year of their lives, and is CEO of FCS Urban Ministries.  He is co-pastor of Community Life Church, and on the boards of CCDA and Word Made Flesh.  Leroy is the author of New Neighbor: An Invitation to Join Beloved Community and Everyday Missions: How Ordinary People Can Change the World and was also chosen as a contributor to the groundbreaking book UnChristian. Leroy is married to Donna and together they have five children.

This post is shared via our partnership with Sojourners