Ron Sider’s newest publication,  The Early Church on Killing, is, as the subtitle suggests, a fairly comprehensive source book for anyone who is investigating what early Christians had to say about war, abortion, and capital punishment. This book should be of great interest to Red Letter Christians because it deals with these three hot-button subjects that inevitably emerge whenever Red Letter Christians get together and discuss social issues.

Firmly rooted in an Anabaptist tradition, it iso not surprising that Ron has a bias against any form of violence against persons, born or unborn. He acknowledges right up front in this book that he is a pacifist, and he turns to the early Church Fathers to make the case that from the earliest days of the Christian era up until the time of Constantine the Church Fathers tended, for the most part, to oppose any justification for Christians to be engaged in killing, whether it be on the battlefield or at the hands of executioners, or in the womb of a woman.

The importance of understanding what the pre-Constantinian church leaders had to say about these three important subjects is clear to anyone who has tried to do theology. Too often, Christians have acted as though in their interpretations of Scripture they can disregard how those in the ancient Church read and understood the Bible. Over and against this short-sightedness the declarations of the Roman Catholic Church, as well as those in the Wesleyan tradition, have contended that Church tradition must be considered when endeavoring to interpret Scripture and applying what it has to teach us to the contemporary situations in which we live. Too often we present-day Christians act as though two thousand years of saintly Christians interpreting the Scriptures can be ignored and that our own personal interpretations take precedence over what have been traditional interpretations of the Bible which have been declared down through the ages. 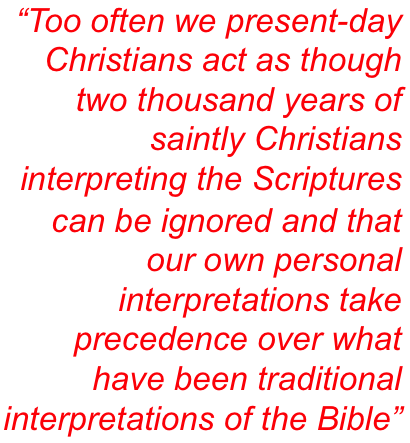 The book of Hebrews reminds us that we are “surrounded with a great crowd of witnesses” to which we must be responsible in all that we do, but especially in our interpretations of the Holy Writ. As Ron Sider makes his case against Christians participating in war, supporting capital punishment, or justifying abortion, he supports his beliefs by resorting to the writings of some of the earliest Church leaders, and thus, takes Church tradition seriously.

It might be suggested that Sider is biased because of his a priori commitments to his Anabaptist theology, but as his commentaries on the Church Fathers makes very clear, he has done his best to overcome any bias that may exist on his part. While he makes it clear that he believes that the overwhelming evidence supports his belief that the Church Fathers maintained a pacifist view when dealing with warfare, he makes sure to include those passages written by the leaders of the early Church which create some ambiguity on this subject. Specifically, he cites some passages from Clement of Alexandria which suggest that Christians who were in the army need not disengage from their vocations as soldiers in order to be faithful Christians. However, he then goes on to cite the fact that, according to Clement of Alexandria, Christians who were in the army ought not to kill in the context of battle — which raises the question as to what their role should be if not engaging in killing their enemies.

Sider makes the interesting point, that Tertullian, another early Church theologian, cites his opposition to Christians being soldiers, not because he is opposed to bloodshed, but because Roman soldiers, prior to going into battle, were required to go through a cultic ritual in which they called upon pagan gods to support them and give them victory over their enemies. It was this idol worship associated with being in Caesar’s army that Tertullian claimed made being a soldier impossible for a true Christian.

While Sider makes it clear that the case in favor of Christians killing in the context of battle is very weak, he, nevertheless, points out that there is some evidence among the early Church Fathers that such behavior might be acceptable for soldiers without their losing their salvation.

I was especially impressed with the way Sider shows that the early Church Fathers adamantly condemned abortion, and at times gave vivid descriptions of the special torments of Hell that women who had abortions would have to endure.

In reviewing the translations of the early Church Fathers’ writing which Sider included in this book, I could find no support for an endorsement for capital punishment. It is interesting to note that the new Pope supports this tradition, even though many Evangelical Christians on the political right endorse capital punishment, given the “right” circumstances.

The theological and biblical conservatism of the author is never concealed, but any reader of this book will have to admit that he tries hard to be objective. He does in this book what you would expect an honest scholar to do.