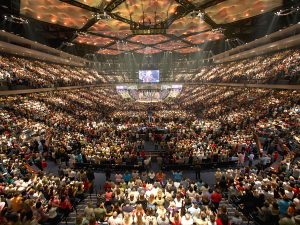 Dietrich Bonhoeffer, the Christian martyr, once prophesied from a Nazi concentration camp that there would come a day when there would be a religion-less Christianity. With ambivalence he looked into the twenty first century, and with a prophetic eye saw that while Christianity might increase, institutional religion would go into decline.  There is now statistical evidence that he was correct.  Studies indicate that in the Western world church attendance is in decline.

We are easily deceived into thinking that support for Christianity is increasing by the emergence of mega-churches.  While some of them, such as Willow Creek Community church in suburban Chicago, are primarily made up of people who previously had no church affiliation, most of the mega-churches in the United States grow by virtue of drawing people from smaller congregations.

In community after community, mega-churches serve as magnets that draw people away from moderate sized and small churches that lack the facilities, financial resources, and staff that can provide premier programs and services that modern day church people desire.  Thus, the mega- churches grow, and the other churches decline.  The net result is that overall fewer and fewer people are attending church these days.

The irony of this is that while church attendance is in decline, people are apparently more interested in spiritual things than ever before.  Books dealing with religious subject matters top bestseller lists.  Young people turn out in mass for concerts featuring the performance of super-star Christian artists.  Massive rallies of men and women are filling football stadiums and civic auditoriums.  It seems as though God consciousness is alive and well even as church attendance withers.     I recently interviewed some key sociologists and asked about this new spirituality.  They concluded that it had three distinguishing characteristics.

First of all, it is marked by a longing for physical healing.  With medical science failing to handle the omnipresent cancer, and with the hunger that people have for the miraculous, people everywhere are seeking a ministry of healing.  Televised healers like Benny Hinn have generated a following of millions upon millions.

The second element that seems to be prevalent in this emerging spirituality is a strong emphasis on environmentalism.  Most churches haven’t yet figured that out, and hence do little in the way of promoting environmentalist concerns.  It is really interesting that when the recently established Evangelical Environmental Network raised the question, “What Would Jesus Drive, ” CNN and every major newspaper from one end of the country to the other picked it up.  People were asking a question that had hitherto seldom been raised in the pulpit.  “If Jesus was among us, would he drive an environmentally responsible automobile?”

There were those who would say that such a question trivializes Jesus.  But those who make such statements miss the point.  Rescuing God’s creation from the devastation of our ecological irresponsibility is a growing concern, especially among young people. Since churches are not offering a program of “creation care” people are turning elsewhere for inspiration and direction.  I recently was in the Pacific Northwest where statistics show us there is the lowest per capita attendance of church anywhere in the country.  Nevertheless, the people there have a hyper concern about the environment.  The New Age movement has picked up on this, and in their bookstores there are a host of volumes promoting spiritual relationships with nature.

The third dimension of this religionless spirituality is a hunger for contemplation and meditation.  This is big among the hassled, stressed-out citizens of our hyper active society.  All over the country “silent retreats” are coming into existence.  More and more people simply want to go away for a few days and be still with God instead of listening to some preacher.  Meditation and contemplation have always been a part of Christianity.  Certainly, the Benedictine monks recognized that a long time ago.  But traditional religious leaders seem to have forgotten that fact.  Again, we find that the New Age movement rises up and says to the church, “If you don’t provide people with the techniques of mediation, we will!!”

It has been said that all heresies are simply exaggerations of neglected aspects of traditional Christianity.  I believe that is true. And I believe that unless churches recover ministries of healing, environmentalism, and meditation, people will leave to have these concerns met elsewhere.