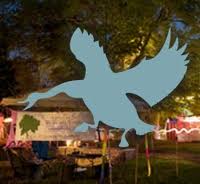 I made my first trip to the Greenbelt Festival in the UK last summer. After years of hearing about how there’s nothing like it in the U.S., I arrived at the Cheltenham Racecourse where some 20, 000 people had set up camp, shop, seminar, pub, and church for a four-day weekend.

After getting  fish and chips from a food vendor (I was in England, after all), I ran into my American friend,  Stanley Hauerwas — also there for his first time. “Did you know anything like this existed?” I asked him. “No, ” he said. “I feel like I’m living in the 19th century.”

I am a product of revivalism in the American South. The camp meetings had come and gone by the time I was born, but they were the catalyst that gave rise to the Baptist and Methodist churches that surrounded me with Jesus. I grew up going to revival meetings at church every fall, expecting somebody to catch the Spirit and get born again. We knew something wasn’t right with the world, and we knew that only Jesus had the power to change us.

Lots of folks are critical of revivalist spirituality these days. Some say it over-emphasized emotion. It was susceptible to political manipulation and market appropriation in a capitalist society, others say. To some it is the epitome of hypocrisy; to others, it implies ignorance. I’ve listened closely to all of these criticisms, and I’m sympathetic to many of them. But I’m also still glad to be a product of 19th-century revivalism. What’s more, I’m glad that its spirit is stirring again — and not only in the UK.

An interesting mix of folks from across the theological and political spectrum have been plotting a festival in the tradition of Greenbelt here on American soil. It is to be an arts festival, they say, that is attentive to beauty, but equally concerned with the proclamation of good news and the practice of justice in our world today. It’s not a space to be owned by any of America’s fragmented church traditions, but rather a place of hospitality where all are welcome and where, God willing, some who’ve been strangers (or estranged, even) might become friends. They’re calling it the Wild Goose Festival. I’m excited to see what comes of it.

When I was at Greenbelt, which is soon approaching its 40th year, I wandered into a coffee tent with a friend and met a dear woman who told me she’s been baking cakes and making coffee at Greenbelt since its very first year. I asked how she came to be part of the festival, and she said it started on her farm. It was a gathering of friends who went home to tell other friends and kept coming back to celebrate the life that God had made possible in a beautiful interruption. You can’t make that sort of thing happen, but I trust that the Spirit is always eager to break into our lives and start something that brings a little more of heaven here on earth. I think that’s what happened when the revivals rolled through North Carolina in the 1800’s, and I pray that’s what will happen again when the first Wild Goose Festival gathers next summer.