On Sunday after the Seattle Seahawks beat the 49ers advancing to the Super Bowl, you could not scroll through your Twitter feed or Facebook or any other form of social media and not hear someone talking about Richard Sherman. In typical made-for-TV form, the public started defining a guy they’ve never met and do not know beyond his performance on the football field and interviews after the game.

Although not a new problem, for the past few years black male achievement has been at the forefront of discussion amongst foundations, educators, and political leaders. Black males are at the top of the list when it comes to the dropout rate, suspensions, being pushed out or kicked out. Not often can you find something good being said about a young Black male in the media unless he “plays by the rules” of what is acceptable behavior.

But here comes Richard Sherman, a young man from Compton, a city that thanks to movies, T.V., and a dash of ignorance, gets a really bad rap. Yes, Compton like any other urban community has its issues; issues that can be pointed to as reasons for why Black males are not excelling in the classroom. Richard Sherman graduated second in his class from Dominguez High School, went on to graduate from Stanford University and is now, as he says, the number one cornerback in the NFL. Forget the countless number of student athletes that don’t even graduate, this guy gradated from Stanford. If that’s not Black male achievement then I don’t know what is. Oh, and one other very important factor that flies in the face of most Black male stereotypes: he grew up in a home with both of his parents.

Related: White privilege, and what we’re supposed to do about it

Not only is Richard an example of Black male achievement, he is also an example of defying stereotypes based on where you come from, what you look like, and succeeding no matter what other people think about you. If you asked the average person, “What would a teenage Black male educated in a Compton Public school likely to do in life?”, they wouldn’t give a response that sounds remotely like what Richard Sherman has done; and the only reason their response would be negative is because of racial stereotypes, misconceptions and generalizations related to Black males in urban context. 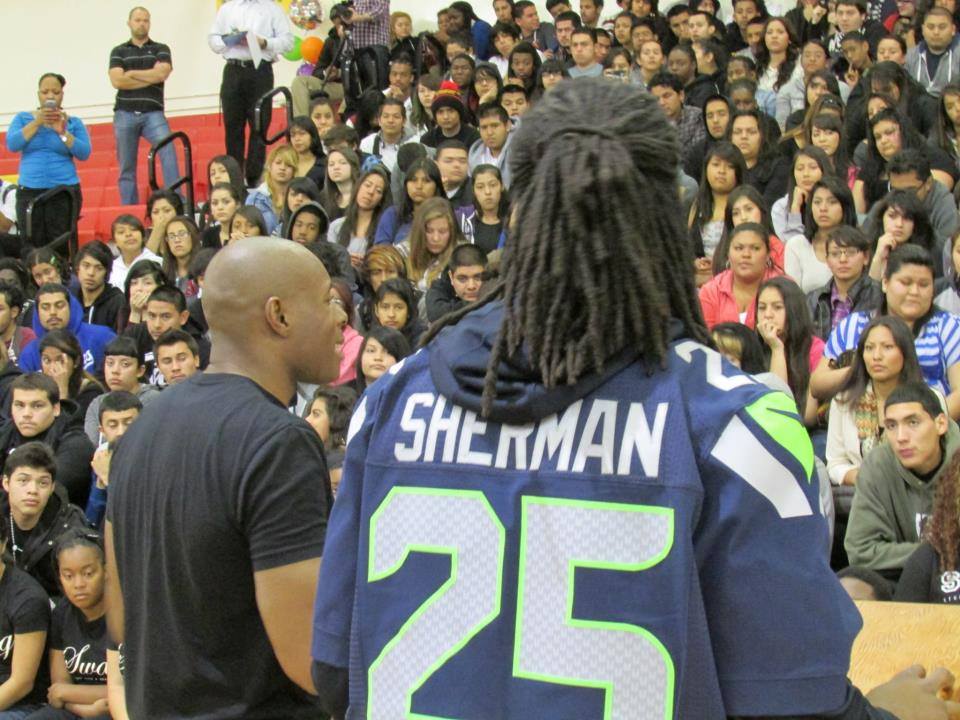 Richard Sherman and Romal Tune speaking to students through SWAG

Those who disagree with me on Richard will probably say things like, well he has an attitude problem, he’s cocky, and so on. Well his attitude didn’t seem to be a problem in high school or in college. What successful professional athlete doesn’t have ego and some attitude? It comes with the territory. What we saw yesterday was one of the most physical football games this season; people were literally carried and helped off the field. Richard makes the game-winning play and people are shocked by the raw emotion and trash talk. If the league were to have every player wear a microphone during the game you probably wouldn’t b’e able to let your kids watch. Trash talk is a part of the game, it’s called getting in the oppositions head and throwing them off their game.

Never mind that Richard Sherman has defied all the stereotypes you would typically place on Black kid from Compton, for some he’s still not good enough. Richard gives of his time often to help kids in need. He visits his alma mater Dominguez High School; he visits kids in the hospital, buys students laptops, and so on. Just last year Richard did a tour with our SWAG-Student With A Goal campaign to promote academic excellence in L.A. He talked to students in Compton, Watts, and South Central about the importance of education. His mother, brother and a few other family members joined us on the tour. When we tried to get media for the event, very few showed up. Ironically, several didn’t think what he was doing that day was much of a story. Simply put there wasn’t any drama or something negative to point out. How many of the critics can say that they give of their time and resources the way Richard does? And how many of the athletes some consider “class acts” go back to their neighborhood and or high school (on their own dime) encouraging kids to follow their academic example?

My point here is simply that before people start calling someone a thug, classless, and so on, they should really take a step back, put things in context, assess their personal biases and look at the entirety of the person they are judging. By the way, I’m a 49er fan.