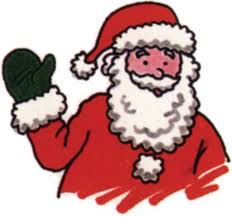 One of the tough decisions that all Christians have to face when we accept Christ is to embrace truth and reject lies. Many of those lies are society’s lies. They are the lies that brought us such much joy as children. With the season approaching, yes, I am talking about “Santa – Our Imaginary Friend”

As a child, I don’t remember believing in Santa, I just pretended to fit in. We were extremely poor so as other children bragged about their elaborate gifts and I didn’t have any to brag about so I told my own lie of getting gifts that I only wished that I had received. It was quite a reality check for a young child. The 2010 Census revealed that the rate of families living in poverty spiked showing that 1 in 5 children in America now live below the poverty line. That was 18 months ago, so I am sure it has increased. Even middle class families put off paying their utility bills to feed into the pressure. Imagine how many children have to face the facts when they wake up to an empty Christmas tree and then face other children who were showered in gifts. I saw a news story last week about “The Santa Academy” in Detroit providing sensitivity training to the Santa’s due to the current economic climate. It becomes difficult to keep up with societies lie when not all of society can afford it.

Later, as a single mom of three, I bought in to all of the hype. It was an opportunity to overcompensate for my childhood. I love creating traditions. I believed in God but found myself mixing Jesus with Santa. I was such a free-spirited mother that I didn’t even realize that I was mixing the truth with a lie. But I was one of those christians. You know, the ones that believed in Christ, but didn’t really follow Him. I admired Jesus without surrendering to Jesus. Now that I look back on it, I realize that not only did I tell many elaborate lies to my children, I went through extreme measures to convince them of them.

Here is just a small list:
Santa – We visited a man dressed as Santa, had pictures taken with him, wrote letters to Santa, I responded pretending to be Santa, left out cookies and milk for him, left out reindeer food, left stocking for Santa to feel them with candy and even had my brother-in-law call when my children were misbehaving to tell them that he knows that they are being “naughty.”

The Tooth Fairy – I would put their tooth under their pillows, wait until they were asleep, replace it with money and then sprinkle glitter from their bed to the window and when they showed me, I acted like I couldn’t see it. I even had my daughter in on the lying as she whispered to my son “Only kids can see the glitter.”

The Boogey Man – While other parents convinced their kids that there was no boogey man, I used it to my advantage. When my daughter was a toddler, she would always try to play in the toilet. When I saw her go in the bathroom and I wanted her out, I would tell her that she better come out or “The Boogey Man” would get her. Terrible, I know.

Where do babies come from? – When my oldest daughter sprung this on me, I was 21 and unprepared so I quickly replied, “From swallowing watermelon seeds.” A year later, she runs in the house telling that she is pregnant because she swallowed a watermelon seed. Not learning the lesson from my first incident, when it came up with my second daughter, I was again caught off guard and unprepared so I told her that I plant a seed in a garden and the father waters it.

I remember when my kids were attending an in-home daycare and the provider was of Pentecostal faith. She wore long skirts, long hair, no make-up and no jewelry. One day, on the way home from picking up my kids, my daughter told me that she had told them that I lied to them about Santa. That it was a way to take the focus off of Jesus’s birthday. I was irate. I contacted her and told her to mind her business and it was my job.

Of course now as a christian woman who every day tries to imitate Christ, I understand that you can’t imitate Christ by embracing lies. I think back on how much I lied yet at the same time, I expected nothing but truth from my children. Would I handle a situation like my daycare provider? No. As the teaching of Jesus will tell you, our job in ministry is to put information out and it is up to the recipient to receive it or reject it. I would never force Christ on anyone. That’s the beauty of free will.

Before I faced the truth, of course I looked for every excuse to embrace Santa. He was like family. I felt like I was about to kill an important character in my favorite story. It was heartbreaking. He was one of the reasons that my children had such creativity and wild imaginations. I compared him to fairytales and quickly found that it wasn’t credible because the kids know that they are just stories. We go through extreme measures to make Santa “real.” A lie was a lie and Santa had to go so I had to kill him off.

I finally told my kids the truth by confessing to them that I had been lying. I told them about the story of the toymaker St. Nicholas and how he made toys for the children and left candy in their stocking as they hung by the fireplace to dry. I told them after he died, the tradition just went on. Then I told them the real reason for the season. That I just bought into the lie and the shallow definition of Christmas.

Even if Christmas not the real date of the birth of Christ as many christians often debate around this time, praise God, He was born. We still celebrate the season for significance of the day and give each other presents in the spirit of giving. We also try our best to help the less fortunate and homeless and in today’s economic climate, the need is even greater. We spend time as a family and take time to appreciate the gift of life, but we no longer embrace the lie.

We embrace the story of the baby born in a manger and the priceless gift that his birth represented. The gift of Grace.

“Therefore, having put away falsehood, let each one of you speak the truth with his neighbor, for we are members one of another.” Ephesians  4:25