In our house, we call this divine stamping the image of God, the belief that every human, everywhere, bears the resemblance of the Creator — the imago Dei, the likeness of Christ made manifest, shaded in every color of the crayon box. From black and white and blue to tan and peach and purple, we see this image imprinted within its many hues, each variation an invitation to open.

As I think about this glorious stamping, my mind wanders past the Father to the Son, to the name often used as an excuse to devalue or ignore the imago Dei in other human beings. In an effort to get right the tenets of the faith, it’s like we forgot to look at the source of faith itself, neglecting to notice how Jesus responded to the people around him. 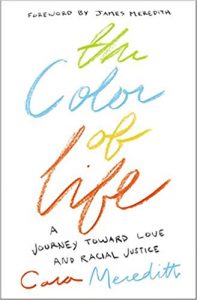 In John 4, Jesus interacts with a Samaritan woman at a well. Not only had he gone out of his way to a town called Sychar, but he’d arrived in the middle of the day, without a bucket to drink from, at a time when he knew no else would be there. He knew he would meet her and her alone, that she wouldn’t have been welcome with the other women early in the morning when they gossiped and laughed together. But Jesus always looks for the outsider. So he asks her for a drink, pushing through barriers of gender and ethnicity, because in those days a man did not ask a woman for a drink of water unless he also wanted her for sex. And Jews did not ask Samaritans for help, for they believed them to be ethnic half-breeds, worshipers of false gods.

The woman asks him questions, questions about religion and about the magical elixir of living water he’s just mentioned, and he replies, “Everyone who drinks this water will be thirsty again, but whoever drinks the water I give them will never thirst. Indeed, the water I give them will become in them a spring of water welling up to eternal life.” When she begs for a drink of this water, he asks her to go get her husband, a reply conservative theologians point to as proof of her sin. Look! She slept around. Look! She really, really needed Jesus because she was a sexually immoral woman. They don’t think about the other side of the story, that in second-century Judaism a woman had no rights in marriage: if a woman was barren, her husband could divorce her. If he didn’t like the way she pounded the wheat and barley, he could discard her. If he believed she was ugly, he could throw her to the side.

The reader doesn’t know why she’s been with a handful of men in her lifetime because that’s not the point of the story. Instead, the point lies in the response of the one who calls himself the Living Water and in the way God treats everyone with dignity. Jesus comes to the woman with a need she is equipped to meet: she can draw water from the well. And in doing so, their exchange is mutual. He doesn’t hold power over her, nor does she have to change or conform to his social perspective.

Instead, through their interaction, the woman no longer felt shame but empowerment. And because Jesus honored the particularities of her identity, including her ethnicity, her religion, and the stories of her past, she was changed—and couldn’t help but introduce an entire community to him.

“If her particularities didn’t matter, then why did John tell us all those details?” my friend Teylar asked over coffee one morning, further driving home the message I needed to hear. “He would have just said, ‘Jesus met someone at the well.’ But the particularities mattered deeply to Jesus, and so do ours.” Teylar’s words rang in my ears, just as images of my sons and my husband, family and friends, neighbors and strangers floated through my mind. The particularities did matter to Jesus, particularities made manifest on the inside and on the outside, particularities that celebrate the diversity of our differences.

How I longed to celebrate those particularities too. I knew I couldn’t solve anybody else’s problems, but I could pay attention to the particularities. I could recognize and honor the imago Dei in those around me.

Excerpted from The Color of Life by Cara Meredith Copyright © 2019 by Zondervan. Used by permission of Zondervan. www.zondervan.com.