Editor’s Note: The following is Part 2 in a six-part series by Nikole Lim of stories painting juxtapositions of immense pain and tremendous hope in Rwanda. You can read the Artist Statement here and Part 1 here.

Next to a glass casing displaying neatly stacked skulls, Rwamasirabo flipped through the pages of a dusty notebook holding the church’s paperwork. He pulled out a church program. On it, was a photo of his former friend, Father Athanase Seromba, a 31 year-old Roman Catholic priest who was responsible for killing 3, 000 of his Tutsi congregation members. The priest wore a black oxford with a white clerical collar accessorized with a distrusting mustache and a toothy smile seething betrayal. Rwamasirabo stuffed the program back into the notebook.

Rwamasirabo’s thin stature commands respect and the lines in his face convey tragic sorrow. His careful, soft-spoken voice expressed feelings of loss. With worn hands, Rwamasirabo searched through a pile of salvaged rubbish to find the chalice from which communion was served.

It reminded him of his daughter.

Rwamasirabo was a well-known government official and during the genocide, he was asked to report to the district office. Because of his standing as a Tutsi, he knew he was a target for the Hutu-extremists. He thought that his church would be the safest place to hide his daughter while he left for the meeting.

The priest of his church, a good friend of Rwamasirabo’s, invited 3, 000 of his Tutsi congregation members to hide in his church. He promised that they would find safety in God’s sanctuary. And so, Rwamasirabo brought his daughter there before he left for his meeting. Soon after everyone was gathered inside, the militia surrounded the church by the priest’s tip. The interahamwedid everything they could to kill each and every person inside. They set off grenades, poured gasoline over the roof, set the walls ablaze—but the church was so strong that the attacks were unsuccessful. For ten days,  interahamwe camped out on the church’s grounds planning their next attempt to destroy all Tutsis inside. 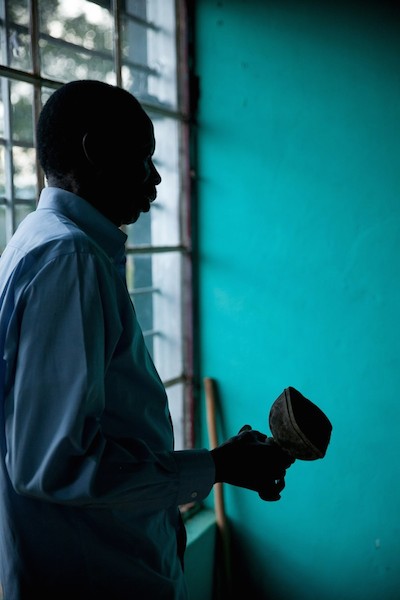 On the tenth day, the priest ordered a bulldozer to destroy the church building. He locked the doors from the outside and gave the bulldozer driver the signal okaying the demolition of his church an the death of his congregants. Three times the driver asked, “Do you really want to do this?” Cold heartedly, the priest said, “Another church can be built.” With no means of escape, Rwamasirabo’s daughter was trapped inside—crushed by the weight of tumbling brick walls. While the ceiling fell, some managed to run outside only to be shot dead by the priest himself.

Three thousand were murdered at the demand of their own priest. The only remaining survivor from the massacre told Rwamasirabo that before the walls tumbled down, his daughter, bloody and bruised, crawled to the feet of the priest and begged for a drink of water. The priest screamed at her,

“You’re ruining the floors with your filth—get lost, ‘cockroach.’”

Behind the church ruins is a reincarnated church with no walls. Rwamasirabo worships there, but hasn’t stepped into a church building since the massacre. Walls remind him of what was torn down. Ceilings remind him of what crushed the people he loved most. A crumpled chalice reminds him of the sacrament that was not passed to his thirsty daughter.

Rwamasirabo examined the chalice for another moment and then threw it back into the pile of rubbish.

Here is a man whose hope, future and source of joy had been taken away in the place where we stood. In a place where he once sought safety, hope and faith, he found only violence, pain and betrayal. How does one find healing again in such a place? As he told his story, his gaze was elsewhere. He seemed disconnected, or rather, so connected that he was forcing himself to disengage to suppress the emotions triggered by memory. He haphazardly flipped through the dusty notebook as if he were searching for something he knew was not even there.

Joshua suggested we move to the other side of the room, at least then, we wouldn’t have to listen to Rwamasirabo’s story with the casing of exposed skulls directly beside him. I couldn’t bear it either. I wondered if it was helpful—sharing this tragic story of loss over and over again. 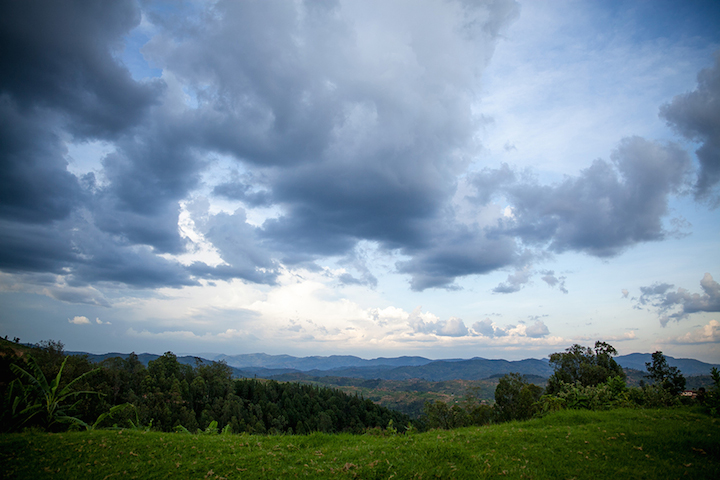 “What gives you hope?”

We stood in silence together.

There were no warm words to offer on this cold night. And so we stood—looking out of barred windows into the mass graves where his daughter was trapped by death.

We thanked Rwamasirabo for sharing his story and together, we walked outside. 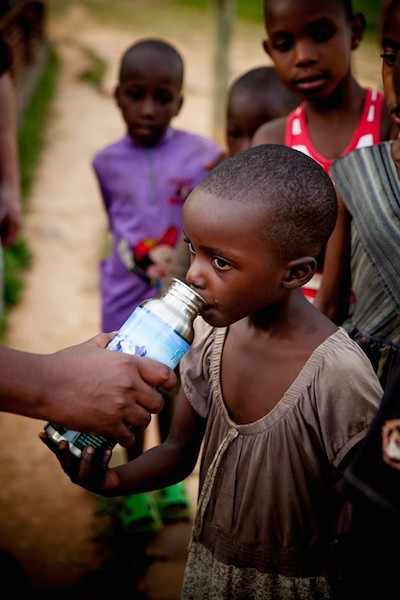 Children from the community were playing outside the fence encasing the remains of the church. One sassy little girl told us a story, “There was an evil priest and he killed the people in this church. The devil was in him. He was involved in killing the people. Now, in this place there are dead spirits—dark spirits like ghosts. But I’m not scared of them because I pray to God and the people in my home pray too.”

She was only 5 years-old.

The sassy girl wasn’t afraid to ask us questions—who are we, where are we from, what are we doing here. Joshua told the children that we were coming from Kibeho, a sacred place known for a spring of holy water which is said to have healing remedies. Joshua offered some for the children to drink.

The sassy little girl took a sip and exclaimed,

As we walked around the circumference of the church grounds, the crowd of children followed us. They would discreetly slip there little hands into ours. My heart bleeds every time a tragic story is told, every time a memory opens wounds, every time unspoken words are expressed through tears of frustration, loss and utter despair. Still, there are subtle reminders that in the midst of pain, there are always semblances of hope. As the sassy little girl held my hand, I felt that somehow, her presence offered a sense of comfort as a way of walking the journey with me. Perhaps, I need to learn from her and believe that I’m already healed.