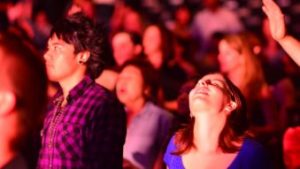 “So, you speak in tongues?” This was the first question John Safran, one of Australia’s leading comedian-provocateurs, asked a young Christian peace-activist and preacher. Why?

The conception of Pentecostalism embedded in the imagination of Australian media is that of a weird, fringe movement within Christianity. Moreover, Pentecostals have long been stigmatized as a “tongues-speaking” group (whatever that means) that occasionally produces spectacularly immoral tele-evangelists.

There is no doubt that there have been some deeply disturbing, along with some simply sad, instances of church leaders failing to live by the principles that they claim to hold. And Pentecostals have practices that doubtless seem “bizarre” to the wider public. But is this the sum total of Pentecostalism? If so, why do more than one hundred thousand people flock to their services each Sunday?

Perhaps Pentecostalism needs to be exposed to see if the stereotype resembles the reality. But to expose a group, it first must be defined – and therein lies the problem.

The term “Pentecostalism” refers interchangeably to a spirituality, a diffuse social movement, a theological projection of the action of God, and a set of scholarly presuppositions about new religious movements.

As a new religious movement, it developed from the antecedents of Wesleyan holiness and Anabaptist traditions. It has experienced phenomenal growth around the world to become one of the fastest growing religions in history, claiming over 500 million adherents in just 100 years. Given its current growth rate, some predict that by 2025 one billion people will identify with this movement worldwide. Globally, it is most dominant in the non-Western and non-English speaking communities of the Third World.

As a spirituality, its influence is felt in almost every Christian group in Australia. This spirituality is based on a reading of Acts 2, in which the Holy Spirit empowered the early church to be witnesses of the gospel of Jesus Christ in and through the outpouring of charismata. These gifts of grace, according to 1 Corinthians 12, include tongues, prophecy and healing.

The contemporary Pentecostal community identifies itself as being in continuity with the early church in the outpouring of these gifts of grace and the preaching of the message of Jesus Christ. For this community, the testimony of the Holy Spirit’s empowerment in Acts is normative – the text is understood as a literal description of the ministry of the early church that should be likewise adopted by contemporary believers.

No doubt the most controversial application of the gifts of the Spirit (as described in Acts and Corinthians) has been the “restoration” of the gift of “tongues, ” which has become a symbol of Pentecostal and charismatic spirituality. But it was not necessarily this symbol of tongues that has led to the alienation of Pentecostalism from the other more established denominations and caused Pentecostals to bear the stigma of disrespectability.

Contemporary global Pentecostal groups generally find their origin in the 1906 Azusa Street revival in Los Angeles. This revival was led by William Seymour, an African-American son of a former slave, who was blind in one eye, underprivileged and poor. Forty-nine years before Rosa Parks would spark the civil rights movement led by Martin Luther King Jr, Pentecostal spirituality broke out among black Christians who practiced radical racial integration, believing the Holy Spirit was being poured out on all people. As a journalist reported with contempt in the Los Angeles Herald:

“All classes of people gathered in the temple last night. There were all ages, sexes, colors, nationalities and previous conditions of servitude.”

The origins of Pentecostalism in Australia can be traced to the early 1900s. The first Pentecostal church in Australia, Good News Hall, was developed with a “community of love” model that included social services for the poor, intervention programs for the unemployed and a soup kitchen before and during the Great Depression. The emphasis was on a practical gospel for the poor, most often by the poor.

The concern was for the spirituality of Pentecostalism to be demonstrated through a practical faith. Since then, Pentecostalism was (and continues to be) associated disproportionately with the poor, people of color and those with less access to forms social power, like higher education. When religion among the other denominations was primarily associated with educated, socially conservative and middle class affluence, Pentecostalism in Australia has been associated with inner city poor and rural groups. Moreover, the stance adopted by many Pentecostals for Christ-centered pacifism during World War I also increased the suspicion towards them.

This social location of Pentecostals amongst the poor and uneducated, along with their practical concern for those suffering, was a primary factor in the early rejection of Pentecostalism as “weird” and not socially “respectable.” Admittedly, while social activism was evident at the inception of Australian Pentecostalism, it became less a feature in the ensuing years.

It should be noted that Pentecostalism in Australia was also a movement marked by the prominent involvement of women. By 1930, twenty out of the thirty-seven Pentecostal churches were founded by women. In an age when women were marginalized and locked out of public and political influence, the women of the Pentecostal movement were pioneering and leading churches.

Women occupied roles that defied the norms of the broader society. But it was out of their type of assertive behavior and grassroots activism that the first wave of the feminist movement emerged. Names such as Sarah Jane Lancaster (pastor of the first Pentecostal church in Australia), Florence Mortomore (missionary to India), Annie Dennis (evangelist and founder of seven churches) and Isabella Hetherington (nurse and church planter among the Aboriginal people of Victoria and Queensland) were just some of the women leaders pioneers shaping early Pentecostalism in Australia.

The involvement of such assertive women who flouted the cultural norms of expected behavior from women was indeed scandalous. It was also a major factor in the early rejection of Pentecostalism as somehow “weird” and disrespectable. But as Pentecostalism developed, the broader cultural pattern of male-dominated leadership took shape and has held sway ever since.

In the light of those defining features of earliest Pentecostalism – a lived alternative to racism, empowerment of the poor, challenge to patriarchy, radical pacifism and practical compassion – the most pressing question is whether Pentecostals today will embrace their origins and recapture that radical impulse, or will it continue its aspirations for middle-class respectability? It is on this point that Pentecostalism must be exposed and questioned.

Developments over recent years suggest that Pentecostalism might be recapturing some of its original radicalism. Rates of the ordination of women and their involvement in senior ministry and leadership are increasing. Pentecostal women are beginning to demonstrate those traits of assertive behavior and grassroots activism once more – Donna Crouch is an exemplar of this shift.

Concern for the poor has also re-emerged in contemporary Pentecostalism. A fine example of this is last night’s guest on Sunday Night Safran – Jarrod McKenna. McKenna demonstrates the blending of Pentecostal spirituality and practical concern for the poor. As the World Vision National Advisor for Youth, Faith and Activism, McKenna rejects the bourgeois conservatism of so much contemporary Christianity, choosing instead to advocate and practice peace and Christ-like compassion among the world’s poor.

If John Safran really understood what is going on in Pentecostalism today, he would have been tongue-tied.

This article originally appeared in the Religion and Ethics section on abc.net.au