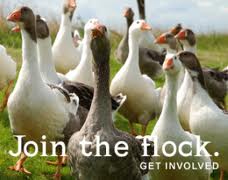 At Wild Goose, I was humbled to be among justice-seeking Christians seeking to follow in the footsteps of Jesus.

I see a deep connection between the personal practice of simple living and activism for social change. While I struggle to live justly, particularly in my everyday purchasing decisions (as Julie Clawson advises!), I often don’t live as simply as I could. Sometimes I take shortcuts, going out for lunch, driving my car to work, or buying something to solve a problem that actually requires time I lack because of overcommitment.

As Mark Scandrette points out, for many of us, our slavery to time and money is a choice. We could cut much from our lives and live more simply. We are the global 1%.

It’s this voluntary reconsideration of wealth and rediscovery of our Christian justice tradition that made Wild Goose such an amazing experience.

But this brings me to my tension with the emergent church, more broadly. The emergent church emerges from the (mainly white evangelical) church’s focus on doctrine (fundamentalism) over practice (simple living, mutual aid, and social justice). This neglect for mutual aid and social justice, however, was possible because many of the church’s needs were met. We were and are the 1st world church.

The emergent church reconsiders its own social location because of the Gospel. But in order to reconsider wealth and privilege, you have to have it in the first place. The African-American church, for instance, has a social justice tradition that’s been constant, born from slavery and oppression, carried through Jim Crow, and continuing through the poverty and systemic racism of our day (the new Jim Crow, to borrow a phrase from Michelle Alexander).

What that means is that most of the people at Wild Goose, which came out of the Emergent Church, are white people. From the printed photos in the speaker section of the Wild Goose program, 14% of the speakers with printed photos were people of color (non-white) and 30% were women. Compared to about 21% of the US population (roughly) being non-white. From memory, the crowd seemed both more racially homogenous and gender heterogeneous than the speaker mix.

This is where many critiques on the left stop.

But who says it’s wrong to look at our own social location and repent of our privilege? You can’t choose that you were born white in the 1st World, but you can choose what you do with it.

I think that the challenge to Wild Goose is to learn how to follow Jesus from poor people, people of color, indigenous and 1st nation peoples (as Randy Woodley points out), those who’ve experienced sexual discrimination because of gender or orientation, as well as from white folks who’ve been transformed. And that’s a project Wild Goose has begun and is continuing.

But whether or not upper-middle-class Americans choose simple living, activism, and following Christ, we’ll always be choosing, and that colors our theology. Some folks don’t have a choice. They have to live simply and share with one another because our system still makes it hard for poor folks and people of color to make ends meet.

The Gospel tells us that the poor are blessed. And so, when we follow the Gospel, we end up poorer materially, but richer spiritually. And in a world where much of our economic spending causes global warming, Jesus’ beatitudes are starting to make a whole lot more sense than we thought they did, just 30 years ago.

I was blessed particularly by conversations with Mark Scandrette author of Practicing the Way of Jesus, Sara McKhaiel, Ben Younan of Common Change, Leann Culbreath, Peter Haresnape of Christian Peacemaker Teams, Jessie Choi, Cathleen Falsani, and Lisa Sharon-Harper of Sojourners, Roger Wolsey, author of Kissing Fish: Christianity for Those Who Don’t Like Christianity, Julie Clawson, author of Everyday Justice, Scott Bass from Murder Victims’ Families for Reconciliation, Randy Woodley, author of Shalom and the Community of Creation: An Indigenous Vision, Sung Yeon Choi-Morrow of Interfaith Worker Justice, and all the folks who came and participated in Dale Lature of Occupy Theology and I’s workshop on Occupy Church.

Thanks for all the friendships! See you next year, and I hope the conversations continue on social media and in blog comments.

—-
Jeremy has been an activist ever since he accidentally ate the red pill instead of the more harmless blue one. He converted to Christianity while serving a six-month prison term for civil disobedience to close the School of the Americas. He blogs and tweets about faith. He is the coordinator of the Crabgrass Christians Initiative and one of the founders of The Occupy Church.