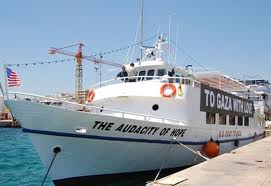 It looked like a scene from an opera. Massed in the doorway and second floor balconies of a quaint building in Athens, facing a magnificent view of the Parthenon, Spanish activists hung banners and flashed peace signs and proclaimed that they wouldn’t leave the building, the Embassy of Spain, until their government assured them that their boat, “The Guernica, ” could at last leave for the suffering and besieged territory of Gaza.

Like other boats in the “Freedom Flotilla 2, ” an international flotilla aiming to end the naval blockade of Gaza, the Spaniards’ boat has been blocked from sailing by bureaucratic measures imposed by the Greek government. This was unacceptable to the activists.

On July 4, 2011, the Spanish Ambassador to Greece had agreed to meet with only four of the Spanish activists, but at a pre-arranged time, one of the four had gone downstairs, opened the door and ushered in 17 others to help them occupy the Embassy. Today, three days later, they have issued an eloquent statement explaining why they still refuse to leave. They call for an end to the illegal blockade of Gaza and for immediate release of their boat so that it can soon reach Gazan shores.

I’m here as an activist passenger on the United States flotilla boat, the Audacity of Hope, also blocked by the Greek government decision. We tried to escape to international waters but were towed back to dock by heavily-armed boats of the Greek Coast Guard. We haven’t tried an embassy occupation. “That’s what your group should be doing, ” said one of the main organizers of the international flotilla effort, referring to the Spanish action.

He’s right. And yet, crucial and telling differences exist between the Embassy of Spain in Athens, where I counted exactly one security guard nonchalantly keeping watch in the first afternoon of the Spanish activists’ demonstration, and the Embassy of the U.S. in Athens. The U.S. Embassy takes up about four square blocks of land. Nondescript, boxy white buildings are surrounded by spiked fences of battleship gray. Embassy employees arrive at a checkpoint and are subjected to search routines that include examining the base of their vehicle as it drives over a pit. Dozens of guards maintain round the clock security. What necessitates such elaborate security measures? Is it simply that U.S. lives are more precious than the lives of others and therefore must be intensely safeguarded, or might it be that menacing economic and military policies enforced by the U.S. have caused antagonism and rage sufficient to endanger official U.S. representatives in almost any part of the globe?

Several of us who were quietly fasting, across the street from our Embassy, earlier this week, called upon the U.S. to help free Gaza, free our ship from a Greek port, and free, or at least visit, our captain who was, at the time, detained in a Greek jail. When we politely declined to end our fasting presence, we were loaded into Greek police squad cars and held for several hours. The next day, the Greek police again detained six U.S. activists, this time for sitting on a park bench across from the home of the U.S. Ambassador to Greece.

Had U.S. activists attempted to occupy the U.S. Embassy in Athens, in an action comparable to that of the Spaniards, we surely wouldn’t have been filmed waving from open air balconies. It’s likely that the only cameras within the U.S. compound that would cover such an event would be U.S. surveillance cameras.

And, of course, the plight we want to make visible is not ours but rather that of the Palestinians in Gaza who rarely have an opportunity to raise or amplify their voices. Our guiding question, our rudder, as we contemplate next steps, asks to what extent we can focus world attention on the plight of Palestinians in Gaza. Today, I read an article by Professor Noam Chomsky in which he asked Chris Gunness, a spokesperson for the U.N. Relief and Works Agency in Gaza to describe the humanitarian crisis Gazans face. “If there were no humanitarian crisis, if there weren’t a crisis in almost every aspect of life in Gaza there would be no need for the flotilla, ” said Gunness. “95 percent of all water in Gaza is undrinkable, 40 percent of all disease is water-borne… 45.2 percent of the labor force is unemployed, 80 percent aid dependency, a tripling of the abject poor since the start of the blockade. Let’s get rid of this blockade and there would be no need for a flotilla.”

And so it goes. Our formation as peace and antiwar activists, should be guided by focusing on the most impoverished people who bear the brunt of our economic and military warfare. We U.S. activists must continue to learn from the durable actions and plans of the Spaniards and numerous other internationals gathered here in Athens, many of whom are facing draconian new economic policies in their home countries as financial institutions hold sway over governments and demand new austerity measures.

Greek activists who assemble every night in Athens’ Syntagma Square have constructed an inspiring, effective means for developing free speech and determined, risk-taking action in a setting that has evolved to emphasize simplicity, sharing of resources and a clear preference for service rather than dominance.

I leave Greece tonight with sincere regret that I didn’t spend more time learning from these sturdy activists.

I and another US Boat to Gaza campaign member, Missy Lane, will head to Tel Aviv, where we plan to be part of a “flytilla, ” a new campaign which will bring hundreds of activists together in Israel’s Ben Gurion airport, all of us intent on reaching Palestinian refugee camps and/or visiting Gazan families.

Earlier this evening, a group of U.S. activists who’ve been able to remain longer, here in Athens, demonstrated at each of the heavily guarded streets leading to the residence of the U.S. Ambassador to Greece. The Ambassador is hosting a huge festival tonight, in celebration of the U.S. July 4th holiday that commemorates independence.

Several Greek people passing us read our signs seeking freedom for Gaza and asked us to understand that as recently as one year ago, the government of Greece showed no sign of submitting to Israeli or U.S. pressure and allowed international flotilla boats to sail. But, now they are dependent on the whims of financial elites around the world. The IMF is prescribing draconian measures which will wreck their economy and make them subservient to the dictates of foreign multinationals. What would happen if the government defied the masters?

So far, the government has complied, and one instance of galling obeisance is their cooperation with Israeli and U.S. governmental insistence that no boats bound for Gaza be allowed to depart from Grecian ports.

The flotilla may not leave Grecian ports this month, but the idea and practice of dissent surely will. The Arab Spring has planted seeds throughout the eastern Mediterranean, from its birthplace in the Tunisia through the Mubarak overthrow here to Greece, and of course throughout the world as it spreads into a heralded European Summer. With democracy in Gaza, here in Greece, and throughout the world so dependent on what our own government does in the United States, U.S. citizens should surely be thinking, thinking constantly, of daily actions, gutsy and inspiring, which we can take in our home country where we face so little risk compared with so many living in utmost precarity — so many beckoning all of us to carry their hard-fought struggle beyond one Arab Spring into a perennial human striving for freedom; into hope, perhaps outlandish hope, even for an American autumn. A grand drama is unfolding here in Greece, in Egypt, in Gaza, and throughout the world, which may end in sorrow or in jubilation largely depending on whether people of the United States are watching, and themselves getting ready to take the stage.