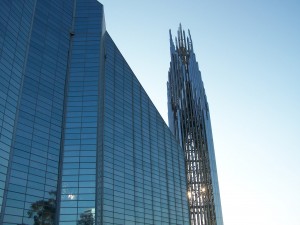 As the news of the financial woes of the Crystal Cathedral is heralded across the country and around the world, a host of critical voices have been raised, at times condemning the cost of building the Crystal Cathedral and even raising serious concerns over the message of its former pastor, Dr. Robert Schuller.

On a per capita basis, it can easily be proved that less money was spent on this building than has been spent by most congregations on their respective facilities. In most cases with other churches, the buildings are only used once a week, and these congregations can easily be accused of inefficient expenditures, given how seldom their facilities are employed for either religious services or community events.

The Crystal Cathedral, in addition to the Sunday morning worship service, also houses one of the largest Hispanic congregations in America.  Each Sunday thousands and thousands of Hispanic worshipers gather at the Crystal Cathedral for a special service in their own language. The church also has maintained an extensive ministry to Hispanic youth in its immediate neighborhood. Also, consider that the only Pakistani congregation that I know of in North America (there may be several others), finds a place at the Crystal Cathedral to come together for worship and to organize for Christian service.

Recently, I went over the list of activities that are part of the ongoing ministries of the Crystal Cathedral. These include classes for those who are learning English as a second language, a host of counseling services and even programs that reach into Los Angeles with help for the homeless. The list of programs sponsored by the Crystal Cathedral is too long to list them all. Let’s not forget that this church also supports one of the finest Christian schools in southern California, meeting a real need for quality Christian education.

It is quite true that there has been great shrinkage in attendance at the Sunday morning worship services at the Crystal Cathedral. A sanctuary which was once packed with thousands each Sunday now only shows a few hundred at each of its two Sunday morning services, but there are sociological reasons for this decline.  The Crystal Cathedral, located in Garden Grove, was once set in the midst of a middle class, Anglo-Saxon, Protestant community from which it received great support. This community has changed, however, and today Garden Grove is a predominantly Hispanic neighborhood. Consequently, the Crystal Cathedral has lost a large part of its congregation, not because Robert Schuller’s message is irrelevant to the needs of people in today’s society, but because, like many churches, the community that it once served has changed. The good news is that the Crystal Cathedral responded by embracing neighboring Hispanic people with an array of specialized, needed ministries. Sadly, those ministries have not provided much income — certainly not enough to keep the Crystal Cathedral out of bankruptcy.

The final criticism that must be addressed is the claim that the positive message of Robert Schuller belongs to another place and another time.  At least that was the criticism leveled at his preaching by the well-known Evangelical magazine, <em>Christianity Today</em>. The criticism that Dr. Schuller’s messages have been nothing more than a watered down versions of optimistic pop psychology, given that his major theme is what he calls “possibility thinking, ” is unfair. It might be said that a holistic Gospel requires more than the upbeat messages heard on the “Hour of Power, but any reading of Scripture will provide solid evidence to support what Robert Schuller preaches. He gives to his listeners a message of hope when, for many of them, all seems hopeless. He echoes the message of the Apostle Paul who, in 2 Corinthians 4:8-9, declares that with God’s help, when we are crushed and beaten down by life’s circumstances, we are not driven to despair.  Even his most severe critics will have to admit that Dr. Schuller is biblically sound when he declares that there are still possibilities for good things to be created out of the desperate situations in which we find ourselves.  Because of such a positive message, many who have been turned off by hellfire and damnation preaching have been turned on to God by the positive messages that Dr. Schuller preached from the pulpit of the Crystal Cathedral Sunday after Sunday. Robert Schuller affirms that there is a place for preachers who preach in ways that drive sinners to repentance, but he asks that all of us recognize that there is also a place for preachers who emphasize the affirmation and hope that can be had through Christ Jesus.

Lastly, I want to say, in no uncertain terms, that while the Sunday morning congregation in Garden Grove’s Crystal Cathedral may be relatively sparse these days and its financial situation has become severe, it cannot be denied that the “Hour of Power” television show still inspires those millions of people around the world who have made this program a major source of spiritual strength. It is a program that not only reaches those who live in western nations, but which is broadcast across the Middle East, where Muslim people, who seldom hear the good news of the Gospel, hear it from the Crystal Cathedral on a regular basis.

I don’t know whether the ministries of this church will survive. I know that Robert Schuller would like to walk away from all its problems and retire, as he justly deserves to do, but he feels that he cannot leave at this time of crisis. Whatever happens, it is my belief that one day, some day, Robert Schuller will hear applause from a pair of nail-pierced hands.