I have read countless articles from political, religious and ethical perspectives on why or why not the U.S. should militarily intervene against the Syrian regime. Most do a decent job evaluating the situation, but I am yet to read one that really puts the human element on the table as a deciding factor.

A few months ago I was going to bed in my hotel room in Tel Aviv when I saw the breaking news alert that there was rocket exchange between Hamas and Israel in and around Gaza. While I have been to many places in “conflict, ” there is something much different about being somewhere that is only miles away from live fire.

I started playing out the situation in my head: “What if this expands into a major conflict? Can I catch a flight back home to be with my family before it gets worse? I’m only 30-40 miles away from the active conflict, am I already in range sitting in this hotel room?”

Now let me be clear, that experience of anxiety and fear is NOTHING compared to what most Israeli’s, Palestinians, Egyptians or Syrian’s have felt in recent years (and MANY other populations). But – even if only in some small way – I could immediately feel the weight of pending war. It is palpable. It is crippling. And if I had my family with me, it would have potentially been unbearable.

Reality is, I’m a product of Western isolation and security that has never put me in a position to experience the anxiety, fear and uncertainty of war. With the exception of refugees, military and limited segments of Americans, most of us haven’t. Yet, we are often the ones who get to determine whether or whether not others in our Global Village experience the realities of war. We read the latest headlines, hear a few sound bites and in the next moment passionately argue our views around the water cooler or dinner table. 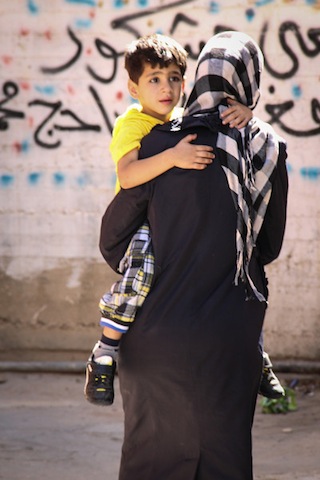 Let’s be honest, it’s easy to make decisions and take sides when you live half way across the globe from the actual conflict.  We are so removed from the realities that it is impossible for us to fully embrace and confront the human elements of war.

There is a family in Syria as I type this.

The kids just returned home from school. It’s not like it used to be. No longer a place for rigorous academic learning, it has become a place of underlying fear at the daily violence. Further, the kids are now hearing that the largest military super power may start sending missiles their direction.

When the father gets home from work, he tries to reassure his kids that everything will be ok, but he knows full well that they may never gather around the dinner table again as a complete family. Unsure what to talk about, he encourages them to prepare for their evening prayers (whether from the Muslim or Christian tradition) as a way to create a semblance of normalcy.

They plead to God for peace.

Imagine that being your family.

Of course, sitting here in the West, there are very few of us that could even pretend to know what that feeling is like, but let’s at least give it a shot. We have to. Our decisions and actions here in the West don’t just magically evaporate in a political vacuum or rallying cry on our favorite news station. Our decisions and actions have direct implications for humans beings just like you and me.

Yes, I know we are only shooting at military targets.

Yes, I know these people may have it worse from the Assad regime.

Yes, I get that civilian death is a reality of war.

While all those things could be argued against (which I won’t do hear), all I’m proposing is that we enter the human reality for a moment before we begin waging our wars of rhetoric.

Also by Jon: The Violence of Peacemaking

It is beyond me how we as Christians could for one second try to talk about this decision outside the reality of real human beings, living in real time and space just like us.

On a human level we now have a responsibility.

On one hand, we can’t simply launch missiles into this region that kills innocent civilians (which they will) and then go eat a burrito and talk about our fantasy football teams.

On the other hand, we can’t simply stand idle as tens of thousands of innocent civilians are being killed by a regime that devalues life.

Friends, our decisions matter and all their complexities must be put on the table. Simple black and white, party line decisions have no place here. These are God’s children we are referring to and if we can’t sit around their dinner table at the end of another day of soccer games, school yard disagreements, work drama and everyday life, then we better at least do our best to make decisions like we have.