ht=”216″ />A new translation of the Bible called “The Voice” (no, Cee-Lo makes no appearances in this one), published by Thomas Nelson, has created quite a buzz. The discussion is not so much around what is in the newest version, but rather what’s left out.

According to a recent article on the Huffington Post, the words “Jesus Christ” do not appear anywhere in the New Testament. And for some, this is tantamount to heresy. The publishers point out, however, that “Christ” was not, in fact, Jesus’ last name.

According to the article, “angel is rendered as ‘messenger’ and apostle as ‘emissary.’ Jesus Christ is ‘Jesus the Anointed One’ or the ‘liberating king.’” David Capes, the top scholar working on the translation, says that the phrases used to describe Jesus actually are more accurate than the use of “Christ, ” (which means “anointed” or “messiah”), particularly given the common misunderstanding about the etymology of the word “Christ.”

Another stylistic difference in the new version is in how dialogue is presented. Rather than including “he said, she said” verbiage, the interactions are presented more like a screenplay. A sample from the Huffington article:

Another Disciple: “A ghost? What will we do?”

The intent is to engage and draw in readers who might otherwise get bogged down in the text itself. Like many other modern interpretations and translations (not the same thing, mind you), the goal is to present the essence of the scripture in a format that can help readers connect with it as a living, breathing document, and not just a relic from our ancient past.

Where we get hung up is when we start debating what it is that’s essential and what isn’t. For so-called Biblical literalists, everything is essential. And in general, the translation referred to as “the Bible” is the King James version. 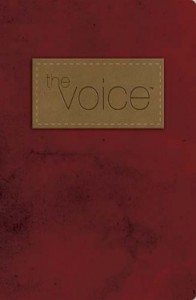 But it’s easy to forget, as the King James Bibles have become the default traditional translation, that even the translators of that version had a specific human agenda. James, King of England at the turn of the seventeenth century, wanted to ensure that the translation supported the existing structure and authority of the Church of England.

It’s easy to forget that all English translations of the Bible mean that we’re bound to depend on the agendas of the people who translated it. Now, just because they had agendas doesn’t mean those agendas were bad, but it’s worth knowing what those angles were they were using in approaching the original texts.

Or at least what we think are the original texts. After all there’s no guarantee that the scriptures in Hebrew, Greek and Aramaic we’re working from haven’t been transcribed and reinterpreted from original writings forever lost. We assume – perhaps on faith – that the ancient scriptures we’re translating are the original, unaltered documents.

And even if they are, it’s necessary to understand the agendas of the authors of those first texts. For example, why in the world does the book of Matthew start out with a mind-numbing list of names, like some verbal literary family tree? Because the author of Matthew was particularly concerned with demonstrating Jesus’ fulfillment of earlier prophecy, portending the coming Messiah. So the “begats” were a sort of line traced from Abraham to King David and then to Jesus.

This is my understanding anyway. I’m hardly a Biblical scholar. But each Gospel (as well as every other text in the Bible) had a particular purpose or agenda to present to readers. Does this mean the content is no good if there’s a human element at play? Hardly. But if we go into Biblical study without this understanding – or if we simply accept that the Bible is a transcription from God’s mouth to paper through human hands, eliminating all human agency – we miss a critical element of Biblical understanding that diminishes our experience of it.

What’s worse, if we assume our understanding of the texts is “the understanding, ” that’s the stuff of religious warfare, dehumanizing subjugation of others and deeper division.

It’s easy to forget that the authors of scripture never sat down in a big room together with the intent of writing “The Bible.” It’s a collection of stories, historical accounts, songs, prayers, letters, laws and prophecies that were recorded and collected over thousands of years.

For some, these agendas folks brought (and bring) to scripture are problematic and should be eliminated whenever possible to get down to the “real meaning” of the text. For me, the agendas are, in many ways, as important as the words on the page. They speak to humanity’s longing to better understand The Divine. Yes, there are cases where authors or translators aim use the power of human faith to their own advantage. All the more reason to approach all texts with a critical eye.

Like comedian Dennis Miller used to say, somewhat tongue-in-cheek: “That’s just my opinion; I could be wrong.”