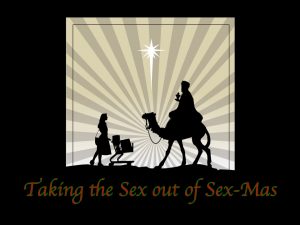 Then one foggy Sex-mas Eve, Victoria came to say: Consumer with your eyes so wide, buy this bra and panties tonight.

Twenty-year-old young women wearing unmentionables stare into the camera saying: “Tell me you love me.  Tell me you want me.  Excite me.”  Getting your yuletide jollies yet?

Let’s be honest: the girls in the Victoria Secret commercial sound fake.  Their attempts at sexy come across as cheesy.  And if the nearly bare bosoms of consumerism haven’t bombarded you yet this Sex-mas season, consider yourself blessed.

Blessed.  There’s a person who believed herself to be blessed. Her story continues to be told each year.  It’s a story of hope, love, joy, and peace. And the mystery of it all: no sex.

Unfortunately, sex sells.  Sex appeals because it awakens the deepest consumer impulse of our being.  When sex fails as an expression of self-giving love, it triggers a self-interest driven desire to have.  In this way, sex and consumerism find a dynamic partnership. Perhaps this is why sex indeed does sell.  Consumerism is the power of “Sex-mas.”

The meaning of Christmas continues to be co-opted in various other ways in popular culture.  Honestly, much of this doesn’t bother me.  What non-Christ-followers say Christmas does or doesn’t mean to them is not my concern.  What frustrates me is when I see Christians complaining about how “secular culture” reduces Christmas to one of many “holidays, ” and yet they continue to spend more money on Christmas décor than on the concerns of the poor. The meaning of Christmas for many evangelicals is rooted in defending a belief about an event, rather than the application of that event in our daily lives.

We Christians have fallen into the trap of Sex-mas. No, we may not believe that Victoria Secret or any other company that uses sex to sell should be supported by our credit cards, but we consume as though driven by libido.

The story of a young Virgin giving birth to a humble King reminds us of the wonder of the first Christmas.  Before Sex-mas took over the church’s imagination, the presence of Christ in the world (the Christ of the Mass) compelled us to give in the way he gave. Christ gave himself to the world.  He was born, battered, and abused by the very world he came to rescue.  Our invitation is to model this sort of self-giving love to our friends, family, and world.

We don’t need to force the rest of our culture to “put the Christ back into Christ-mas” or to say “merry Christmas” instead of “happy holidays.”  This country isn’t a Christian nation and so we must learn how to live at peace with those who may not yet follow Jesus.  Beyond this, however, the people of God might do well to recognize those moments during Advent when we fail to incarnate Christ in the world because we give into the lure of Sex-mas.  We may not like the ads, but we sure like the stuff they make us crave.

The only way to take the Sex out of Sex-mas is to deny our consumption impulse and to show the world around us the incarnated Christ. Then and only then will we have won the battle for Christmas.  Not by defeating secular culture, but by confronting our own Sex-mas drive.