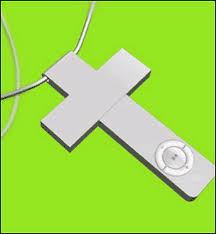 I went into a Christian bookstore the other day and was surprised to see some of the most prominent display space given over to military flags for the U.S. Army, Navy, Air Force, and Marines. These flags, and a vast assortment of Americana merchandise, were on sale for the holidays.

A part of me ached because I know how difficult it must be to run a little Christian bookstore these days. But I winced as I heard the manager fatalistically confess that he resorted to selling military merchandise to “make it.” It is a sad day when we sell our military banners next to Jesus’ enemy-loving cross to make it in a financial recession. (Before long we’ll be pushing posters of scantily-clad women accompanied by a verse from Song of Solomon).

It’s true that my Christian faith gives me a passion for peace and sets me at odds with militarism. But I think I’d feel a similar dissatisfaction if the last resort for economic survival at our bookstores was selling Home Depot or Wal-Mart gift cards. I just have higher hopes for a distinctive Christian witness in the world today, even in a recession … especially in a recession.

I grew up in the Bible Belt. When I became a Christian, I learned I didn’t have to stop buying stuff — I just had to start buying Christian stuff. An entire world of retail spending possibilities lay before me: the Christian industrial complex. There were Christian t-shirts, bumper stickers, even Christian candy — “testa-mints” — peppermints wrapped in a Bible verse. We were taught “secular” was bad, and supplied with charts that countered popular mainstream bands with a Christian alternative. We burned our old tapes (which is what we listened to back in those days) and went to the Christian albums. We were often sadly disappointed. They just didn’t sound like Metallica. As a friend of mine quipped: “All these Christian artists say, ‘God gave me this song, ’ and then you listen to it and know why God gave it away.” I later learned that Christian art doesn’t have to be a mediocre counterfeit of the original. And, I learned that Christianity is not about conforming to the world, but about being transformed by a God who is crazy about the poor, fond of toppling the powerful, and raising the lowly … and who I’m pretty sure would feel conflicted wearing a “God bless Rome” shirt or doting an “Army of One” sticker on the bumper of his SUV… I mean, hybrid. I mean donkey. Never mind.

I became convinced that the world will not know we are Christians by our bumper stickers and T-shirts, but by our love.

In light of all the exciting movements addressing world hunger and peace, many with Christians in the forefront, I really believe Christian stores should be pioneers and innovators, rather than chameleons. Selling fair-trade coffee is a good start. But we have a long way to go. I just saw an iPod shaped like a cross. Ugh.

Right after I left the bookstore with the military flags, I dropped by the old-school general store (I was in my Tennessee homeland). It was charming to see lots of the old vintage lunch-boxes and wooden games, but what struck me aside from the nostalgia was how relevant some of the merchandise in the general store is today. There were books on sustainable living and permaculture, books on urban farming and guides of how to identify edible plants. There were books and how-to kits on the Appalachian arts — teaching woodcraft, beekeeping, canning, quilting, and pottery — arts that are in danger of extinction. I’m not one to buy lots of stuff at Christmas, but man I was tempted.

I guess that’s also why it’s so fun to go to Amish country to get gifts for the family — they seem pure and innocent in contrast to the plastic clutter of the malls. No doubt there are great Christian stores like Ten Thousand Villages, committed to selling stuff that matters, and in ways that reflect the values of Jesus and the dignity of people.  But we have a long way to go … and I say “we” because most of these Christian bookstores sell my books, so my lament is not at them but with them. However, I am convinced that if the Christian bookstores continue to go bankrupt, it will not be a matter of accounting but a matter of imagination.

One of Philly’s last Christian bookstores just told me they were going out of business. The Crystal Cathedral in California which has a whole line of Christmas tree decorations just announced it has been sold. Studies show that not only is the institutional church hemorrhaging economically, but the Christian industrial complex is in really bad shape. I think that’s why it made me so sad to see the Christian bookstores selling flags and military paraphernalia at Christmas. What we need right now, especially in the world of Christian retail stores, is creativity and courage. We need not simply ride the wave of the market, but we should be making new ripples for the kingdom of God.

I hope the Christian bookstores continue to sell things like the Bible, good books, and stuff folks need like communion plates and candles. But what if, alongside those things, you could buy a book on how to make your own candles and communion plates. What if next Christmas you went into a Christian bookstore and saw gift cards for digging a well in Africa, or buying a flock of chickens for a family in Guatemala so that they can start their own microbusiness? What if you could buy a phone card and contact info for a Christian in Iraq so you could become friends? That seems like a good way to celebrate the savior who was born a homeless refugee. What if, alongside the epistemology books, you could find a book on woodworking –  seems like the carpenter of Nazareth would dig that. Or what if you could buy, not the U.S. flag alone, but a flag with every nation on earth represented — remembering that this is the season that we remember not the God that so-loved America but the God that so-loved the world.  Long live the local Christian bookstore. Let’s keep dreaming … and hope our dreams come true.