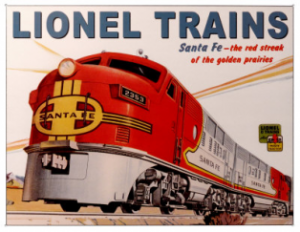 The ecstasy of spirituality might be compared to an experience I had when I was seven years old. It was Christmas, and I wanted more than anything to have a set of Lionel electric trains. I had asked my parents, but they told me I had to ask Santa Claus. I was already skeptical about the reality of that red-flanneled saint, but I knew how the system worked. So, on a carefully picked Saturday, I went with my mother to Gimbel’s department store–where the real one was. (I was always confused about the many Santa Clauses that appeared on the streets at Christmas time, so my mother explained to me that the others were Santa’s helpers, but the real one was at Gimbel Brothers.)

As I stood in front of Santa that particular day, I shouted loud and clear, “I want electric trains!” I said it loud enough for my mother to hear. For that matter, I think half of Gimbel’s heard me.

Christmas morning I tumbled down the steps and ran over to the pile of presents undernearth the tree. I picked up the biggest box, tore away the paper, lifted the lid and found. . .underwear and clothes from my Aunt Madeline! Now I’m a pacifist, but I believe that anyone who gives a seven-year-old boy clothes for Christmas should be shot!

I went through the rest of the presents in halfhearted fashion, convinced that my hopes would not be realized. By then after a while I noticed a large box, way behind the back of the Christmas tree. And when I pulled it our the label said, for Tony.” I tore open the paper, lifted the lid, and there they were–the Lionel trains I had dreamed about! I picked up the engine and hugged it to my little chest. I loved everybody. My joy knew no bounds. I loved my mother. I loved my father. . .I even loved my sisters.

My ecstasy lasted for about three hours, and then something happened. It wasn’t that I broke the trains. Broken trains could be fixed. Something worse happened to them. They got old! In just three hours they lost the luster of newness. Once they became old, all the king’s horses and all the king’s men could not restore their luster again. I started to think, You can’t do much with electric trains anyway. You put them on the track, turn on the switch of the transformer, and they go around in a circle. You watch them, and watch them, and watch them, and that’s it. The joy was gone.

The Bible says that if anyone be in Christ old things pass away and all things become new (2 Cor. 5:17). The God of Scripture promises to make everything new. Our God creates an aliveness that can drive away the blues, and maintain a sense of newness about the wonders of our world that last a lot longer than three hours.

So today, regardless of presents, may we all strive to remember that toys, boxes, and clothes will all become old. The newness found in Christ, the everlasting newness, will sustain and preserve all things.

In the words of Dr. Seuss: