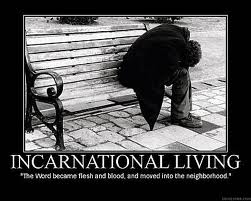 First, I want to say I do not want to discourage those who have found renewed hope in Jesus and the Church through “emerging church” conversations and circles. And I am fully aware that there are all sorts of “emerging church” conversations happening, especially overseas, and some promising new signs of hope such as the indigenous (First Nation) youth movement that embraces the language of “emergence.” There are lovely things happening inside and outside of the great “emergence.”

If you are unfamiliar with the language of “emerging church, ” it has become a very confusing trend within the contemporary renewal happening in the Church. A decade or so ago, a bunch of young, mostly white evangelicals started seeing similar conversations beginning to spark all over the place about the reshaping of evangelicalism, the rethinking of missions, and re-imagining what it really means to be the church.

Language of “the emerging church” connected many of the dots, which remained primarily white evangelical men, many of whom had great ideas and led vibrant communities and organizations. Nonetheless it has always been evident that this is not the whole conversation or renewal happening in the church — and the fact that the dozens of books and cover stories done on the “emerging church” hailed mostly faces of white men shows the many forces of colonialism, privilege, and all the other principalities and powers that still threaten to hold our faith captive. Entire movements of hip-hop church and missional communities overseas and indigenous movements of first nation Christians have also been stirring up all over the world, though they do not get the same air time or book deals.

Eventually, books and brands began identifying as “emerging church” or “emergent.” So it got a little messy. In my opinion, “the movement” became a bit narcissistic, and often became little more than theological masturbation: feels good but doesn’t give birth to much. It’s one thing to talk about theology. It’s another thing to talk about talking about theology. There is some sloppy theology out there. Some “emerging church” folks have repeated some of the mistakes of fundamentalism (only with more tattoos), and others have repeated the mistakes of liberalism (only with more wit). Meanwhile, there are many folks who seem to know exactly what “emerging church” is and think it is the anti-Christ. However, neither of these, I am convinced, represents the silent majority of young evangelicals of all colors of skin who love Jesus with all that they are and are not willing to use our faith as simply a ticket to heaven and ignore the hells of the world around us. There is a new evangelicalism that loves Jesus and wants to change the world.

While there are many voices who self-identify as “emerging church” or “emergent” whom I consider close friends and refreshing voices in the church, there are also folks who identify as such whose beliefs and practices, or lack thereof, I find very problematic. On the flip side, I also have many friends who deliberately do not identify as “emergent” or have never heard of emergent whom I find to be beautiful, brilliant voices in the church… and likewise, there are those same “non-emergent” figures whose beliefs and practices I find deeply problematic. Hence the sloppy mess. What has been most disturbing is that much time is being wasted critiquing or defending this “emergent” thing, that as far as I can tell has no real life or DNA of its own. And many of the folks who claim to be critiquing me or our community end up only critiquing this “emerging church” phenomenon — and clearly are not familiar with our community, statement of faith, practices, ecclesiology, or writing. In fact, much of the time I find myself agreeing wholeheartedly with critics who thought they were critiquing me but really were only critiquing “the emerging church.” I was merely guilty by association, and an association with something I could not even identify, much less align with.

So all that to say, I find the “emerging church” language, at least the Emergent™ brand, utterly unhelpful. So I will not spend much energy, beyond this note, to try and defend, or for that matter destroy, what seems to me little more than a brand name for a product no one can identify. There are many great things that have come out of the “emerging church” discussions and communities. People have been reminded that discontentment is not a curse but a gift to the church. Many of the conversations have reminded people that they are not alone as they dream great dreams for the church. And that we have to constantly re-imagine what it means to be Christ’s body in our age and context — but no one needs a brand to dream those dreams.

Without a doubt — there is an actual movement in the church, after all, and I would much rather celebrate that, and join it with all my heart, and encourage everyone I know to do the same. Labeling it with a proper noun, however, or worrying about how somebody else labels it no longer interests me at all. True movements are measured not in decades or book deals… but in centuries. It is an incredible time to be alive. God is moving in the world, and God is restoring the Church — but that is nothing new… it seems to be a pattern that happens every few hundred years. How cool it is to hear that ancient whisper that Francis and Claire heard in Assisi and so many others have heard throughout history… “Repair my Church, which is in ruins.” Let us continue the reparations.