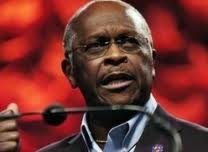 You can’t go online lately without hearing about hearing about Herman Cain and the allegations of sexual harassment haunting his campaign. Those posts inevitably make me wince—not the articles themselves, but the comments crowded beneath them like protestors punching hand-scrawled signs in the air, screaming at the “other side.” Now, before you get all riled up, this article is not about Herman Cain. It’s about those comments. Specifically, it’s about the Christian community’s response to women who accuse men of sexual impropriety.

You’d think that Christians would be very interested in standing up for a woman’s dignity. After all, don’t most Christian books about gender teach that it’s a man’s role todefend women? But all too often, the evangelical response to men’s shameful shenanigans, especially when nothing physical has taken place, has been a sort of snide, “boys will be boys” affirmation of male virility. High fives all around, while the woman, mortified, slinks back into the shadows. I mean, what did she expect, trading the safety of the kitchen for the wild and wooly “man’s world”?

I grew up surrounded by loving, protective men, so this attitude truly shocked me when I first encountered it. I felt downright betrayed in the mid-nineties, when Focus on the Family began circulating ridiculous stories about little boys being wrongfully accused of sexual harassment. This philosophical slight-of-hand effectively took the church’s eyes off the real problem—that girls and women were being shamefully mistreated at school and work—and cemented evangelicals’ jaundiced view of much-needed sexual harassment laws. I remember writing an impassioned letter to Dr. Dobson (who I had idolized up to that point), suggesting that he come take a walk down the hallways of my school, where girls wore running shorts under their skirts for fear of being “flipped, ” where boys made up lewd songs about menstruation and masturbation to enjoy the sick power-trip of humiliating insecure teenage girls, and where stepping onto the school bus was like stepping into the crucible, an hour-long test of endurance that bore more resemblance to hyper-sexualized, post-apocalyptic anarchy than a peaceful ride home. I never sent the letter, but I did manage to convince my parents to start picking me up after school.

My experience was not the least bit unusual, nor was it extreme. (My friend Ryan cowering in the choir room because he had received death threats, or the sort of nonsense that went on at this school are better examples of how out of hand sexual harassment can get.) Sexual harassment is real, it can cause devastating emotional damage, and Christ’s followers should be speaking out against it, instead of suggesting people “suck it up” and accept the prevailing cultural iniquity. So why are some Christians acting like sexual harassment laws and the people who avail themselves of them are the scourge, instead of sexual harassment itself?

A comment on a recent Red Letter Christians article exemplified one of the prevailing attitudes about sexual harassment. “As for these allegations I will tell you firsthand that in an effort to protect women in these situations we have gone quite the other way. All a woman has to do is ‘cry wolf’ and ruin a man whether it’s true or not. It’s BS. The exact same punishment should be exacted to the complaintant that the defendant is facing should the charges not be proven… If you have proof then by all means bring it but if it’s a he-said/she-said then you should have to deal with it just like every other person who cries wolf without proof.”

Okay, look. I don’t doubt that some infinitesimal number of messed-up women do falsely accuse men of sexual harassment. But the sort of overblown antagonism this commenter (and countless others) expresses is, in and of itself, a form of intimidation that serves to keep women’s mouths shut. Since when does a woman need “proof” to complain about inappropriate behavior? (Remember—she’s reporting it to her school or workplace, not taking the guy to court—although she can sue the organization if it fails to take appropriate action.) Unless there are witnesses willing to back up her story, there is no way to “prove” that harassment has taken place. For that matter, there is no way to prove that a woman has been raped, unless she goes to the hospital and submits herself to rape treatment.  (Unfortunately, most prefer locking themselves in the bathroom and sobbing in the shower.) Does the fact that an allegation can’t be proven mean that a woman shouldn’t report it? How convenient.

And what are we supposed to make of the shudder-worthy suggestion that a woman be “punished” if her allegations can’t be proven? Happily for the “complaintant, ” the worst punishment most harassers face is losing their job, a possibility many women in that situation are staring down anyway. Still, the truth of the matter is that most women don’t report sexual infractions for fear of reprisal. Oh, we don’t stone women for coming forward with allegations of sexual impropriety like they do in some other parts of the world; we just call them liars, sluts and hussies who were obviously asking for whatever they got. We imply that these troublemaking women are shameless seducers with wicked ulterior motives, carnal temptresses intent on bringing virtuous men down into the grave.

And all Eve’s daughters sigh.

I’m going to shift gears for a moment, because when it comes to unwanted sexual advances, harassment is just the tip of the huge, destructive and mostly hidden iceberg lurking under the surface of American society. We need to look at the culture these allegations are taking place in. According to the Centers for Disease Control, one out of every four girls has been sexually molested by the time she turns 14. (Stop for a moment and let that sink in. One in four of our precious little girls.) One in six women has been a victim of attempted or completed rape in her lifetime, and approximately 7.8 million women have been raped by a boyfriend, husband, or significant other. According to estimates from the US Department of Justice, fewer than half of all rapes are reported to the police, and only one out of twenty rapists ever spends a day in jail for their crimes.

What this tells me is that the problem isn’t histrionic shepherdesses crying wolf. Most of them never even make a peep. The real problem is that the flocks are teeming with wolves, and women are afraid to speak up for fear of getting their throats torn out. Liar. Hussy. Shameful. Slut. Everyone will hate you if you tell.

Friends, sexual harassment is a serious issue. As Christians, we need to stop minimizing these evils and listen carefully to what the victims have to say. Even when it costs us something. Even when it makes us uncomfortable. And rest assured, it probably will.

I’ll leave you with some words of wisdom from Ephesians 5:3-13, because Paul says it better than I ever could: But among you there must not be even a hint of sexual immorality, or of any kind of impurity, or of greed, because these are improper for God’s holy people. Nor should there be obscenity, foolish talk or coarse joking, which are out of place, but rather thanksgiving. For of this you can be sure: No immoral, impure or greedy person—such a person is an idolater—has any inheritance in the kingdom of Christ and of God. Let no one deceive you with empty words, for because of such things God’s wrath comes on those who are disobedient. Therefore do not be partners with them.

For you were once darkness, but now you are light in the Lord. Live as children of light (for the fruit of the light consists in all goodness, righteousness and truth) and find out what pleases the Lord. Have nothing to do with the fruitless deeds of darkness, but rather expose them. It is shameful even to mention what the disobedient do in secret. But everything exposed by the light becomes visible—and everything that is illuminated becomes a light.

Brothers and sisters, let’s not squeeze our eyes shut and pretend that the darkness is just in our head. Instead, let’s expose the deeds of darkness, shining the bright light of Christ’s truth on the dark spots in our society, in our histories, and in our hearts, so God can illuminate them and make us a beacon of light to a dark, dark world.

—-
Jenny Rae Armstrong is an award-winning freelance journalist who blogs about faith, social justice, and women’s issues at http://www.jennyraearmstrong.com/. She is passionate about building up the body of Christ by building up women, in her rural community and around the world. She loves making new friends, so drop by her blog and say hi, or follow her on Twitteror Facebook.