Jesus fished with his disciples.  Jesus multiplied a few fish into enough to feed a village.  Peter, filled with the Holy Spirit, fell into a trance in which God said: “Get up, Peter. Kill and eat” (Acts 10.13).  The New Testament stories about the present time, not only give permission to kill and eat animals, but even allows for more animal consumption than the Hebrew Scriptures.

According to the Bible, eating meat is not a sin… unless, your god becomes your gut.

Six months into my marriage, Lauren (my wife), convinced me that I should give in.  So I did.  Her name is Sadie.  She’s my first dog.  I promised Lauren that I would not be the primary caretaker of this pet and that we would be called “pet-owners” or “masters” not “mom and dad.”  And then, this pup grew on me.  What was hesitation on my part initially, eventually became, love.

I love my pup.  She’s now 3 years old and every morning after she is released from her crate with our second pup, Mylee, I can trust that she will position herself tightly against the small of my back while Lauren gets ready for work.  My pups, for some odd reason, have become like children.  Weird.  I now question the death of any animal. I’ve gone soft.

When Lauren and I moved into our current city, we lived in an apartment with a small outdoor storage closet.  We put our fake Christmas tree and other random boxes in the small space.  Over time, we noticed small pellets on top of the boxes.  What could they be?  And then came the phone call: “Kurtis, I saw a mouse!”

And what did we notice over time?  These pink-nosed scavengers indulged in our pups’ food and water bowls that were conveniently placed on the patio that connected the back door to the outdoor closet.  We knew it was time to act.

But, what were we to do?  These little rodents felt like more than rodents.  They seemed like creatures that mattered to God.  Why is this?  Well, before having dogs, I never cared about mice and other pests, but having animals in my home changed something… it changed me.

So, our solution involved purchasing a humane mousetrap (thanks to PETA).  And on five separate occasions, we took our captured mice and set them free out in the wild.

About 3 years ago, I stumbled across a video called “Eating Mercifully” at the recommendation of pastor and author Greg Boyd.  I viewed horrific scenes of factory farm footage of chickens cramped up in small cages, of cows treated like slaves, and pigs in pens so tight that disease and violence flourished.  Then, I watched Food Inc and several other documentaries.  I read up on the effects of irresponsible farming on the environment.  And I realized that my eating habits contributed to the abuse of animals, God’s creation. 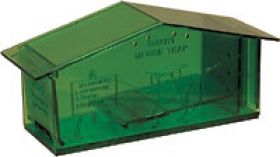 I felt powerless.  The only food group I like is, well, meat.  Meat and starches.  Certainly no veggies except the occasional bit of lettuce in a salad.  Therefore, I determined that I’d do all I could to purchase ethical meats when available.  Unfortunately, such meats are difficult to find in my town.  Picky and powerless.

Lent changed my life.  Lauren and I decided to do something over the top for the 46 days leading up to Resurrection Sunday.  We lived off of $2 a day.  One thing that this meant was that I could no longer afford to eat meat.  So, I gave it up as part of the experiment.

To my amazement, I did it!  No meat during Lent.  And when it was over, my energy was in tact.  I didn’t need meat to survive. This led to a determination that I’d eat less meat.  That goal was short-lived.

The god of the gut

In America, we’re trapped in a system of consumption and gluttony.  We don’t believe that any other way is possible when it comes to our eating habits, so we perpetuate a cycle of cruelty to animals.  Factory farming in many (not all) of its forms treat animals like a commodity to be counted, cut up, and consumed.

Consumption.  Greed.  I think Paul had something to say about this:

Their destiny is destruction, their god is their stomach, and their glory is in their shame. Their mind is set on earthly things.  Philippians 3.19

Is it possible that we Americans allow our “god” to be our “stomach” more often than we think? For me, even after learning about the terrible way that animals are treated in many factory farms, I couldn’t give up eating meat produced by these places because of the subtle idol of food.  At many times, I’ve allowed my stomach to have the authority of a god in my life.

As I stated earlier, it’s not a sin to eat meat.  According to the New Testament, we have this liberty.  But, I have to wonder if there’s a difference between the agricultural practices of the first century and modern day factory farms? Do some (again, I am not making a blanket accusation here as I know there are many compassionate farmers in the industry as well) factory farms fail to follow this simple proverb?

The godly care for their animals, but the wicked are always cruel. Proverb 12.10

God cares about animals and charges us to care for them. This isn’t the case with our modern day system of capitalistic farming.

I’ve decided enough is enough.  I don’t believe it’s a sin to eat meat products, but I do believe that the majority of our meats come from a degrading sinful system.

So, for the last 3 weeks I’ve committed to a “flexetarian” diet.  What this means is that I avoid meat (almost as much as a vegetarian) except on rare occasions (no pun intended

).  My goal is not to live in legalism, but out of an awareness of the love that God has put within me for animals, and in light of God’s love for his creatures.  Yes, you can eat meat as a Christian and not sin.  But no form of cruelty to animals is consistent with a biblical worldview.  To justify cruelty may lead to the subtle god of the gut.

—–
Kurt Willems is an Anabaptist writer and pastor who is preparing for church planting next year by finishing work towards a Master of Divinity degree at Fresno Pacific Biblical Seminary.  He writes at: the Pangea Blog and is also on Twitter and Facebook.