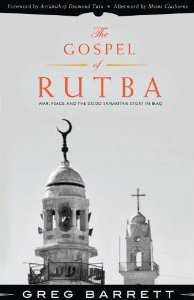 Hardly anyone ever visits our community, Rutba House, without asking, “So what does Rutba mean?” Once someone confessed they thought it must be an obscure Old Testament character they’d forgotten.

But I always say, “I’m glad you asked.” We named this place after a village in Iraq because we never want to forget what we learned there.

During the U.S. invasion of Iraq in 2003,   Leah and I traveled with the Christian Peacemaker Teams to Baghdad, believing that the way of Jesus called us to interrupt the unjust war our country was initiating. Three days after U.S. planes bombed the hospital in Rutba, our American friends’ car hit a piece of shrapnel on the highway outside of town and landed in a side ditch. Iraqis stopped by the roadside, took our bleeding friends into their car, and drove them to a doctor in Rutba. “Three days ago your country bombed our hospital, ” he said, “but we will take care of you.” He sewed up their heads and saved their lives. When we asked the doctor what we owed him for his services, he only said, “Please, go tell the world what is happening in Rutba.”

The more we told the story, the more it sounded like a modern day Good Samaritan story. A good Iraqi—a good Muslim—not only saved our friends’ lives; he also showed us what God’s love looks like. We can’t be saved apart from the stranger, even the stranger who seems to be our enemy. The gospel of Rutba is that hope lies in the “enemy.”

A few years ago now, I got a call from a reporter in the D.C. area who said he’d heard the Rutba story and wanted to tell it. He wanted to go back to Rutba with some of us who’d been there and try to reconnect with the doctor who saved our friends. It’s something we’d wanted to do, so we jumped on the opportunity to arrange a trip. I planned to return to Rutba in the summer of 2009. But when friends in Iraq asked us to reschedule, the new date was January of 2010–when our daughter was due to arrive in the world. I had to back out, but the trip went forward.

The result is a book that just arrived this week: The Gospel of Rutba: War Peace, and the Good Samaritan Story in Iraq. In his intro to the book, Desmond Tutu writes, “The Gospel of Rutba illuminates universal truth. In its pages you will stare into the soulful eyes of a foe and recognize a friend.” Greg has given us a wonderful gift, digging into the story as only a good reporter could, filling in gaps and finding people we’d never imagined meeting again, even less hearing their side of the story. (Like the Special Forces Unit that nearly stopped us in the desert a week before the accident and took control of Rutba shortly after we left.) The result is a well told tale pointing to the truth that we’ve tried to live here at Rutba House–that hospitality, however surprising, doesn’t have to be an exceptional thing. It was an instinct in Rutba, and it can become our habit of being in the places where we are.

As excited as I am about the book, I’m even more excited that several of us who’ve been caught up in this story are going to have a reunion in a few weeks at the Wild Goose Festival, here in North Carolina. At 9pm on Thursday night, June 21st, we’re going to tell the story and proclaim the gospel of Rutba together in song and story, Arabic and English. There are lots of other good reasons to come to this festival that stretches from Thursday afternoon through Sunday evening. It’s an old school camp meeting for a new kind of Christian who’s passionate about Jesus and justice. (It is, as Peter Maurin used to say, “a vision so old that it looks like new.”) But if at all possible, I’d encourage you to come out Thursday evening to join us for this celebration. Tell your friends you’re going to hear about the gospel of Rutba.

Just tell them, “I’m glad you asked. Come and see.”

—-
Jonathan Wilson-Hartgrove is the author of The Wisdom of Stability: Rooting Faith in a Mobile Culture and Common Prayer. He is an author, speaker, and activist who currently resides in Durham, NC at the Rutba House. You can reach him at his website, www.jonathanwilsonhartgrove.com