As I came to the end of writing Red State Christians, I kept remembering something an editor of a Christian magazine had written to me, after reading a story I’d published elsewhere: “You do write about ‘red state Christians’ as if they are an ‘other’ that you are trying to sympathize with and explain to people like you, who are implicitly different.” That bothered me, because I didn’t quite think it was true. To tell the stories of Red State Christians in this book is like telling pieces of my own story and the stories of my family.

I am the granddaughter of a German American Lutheran pastor who ministered on the Kansas-Missouri state line in the midst of the civil rights movement. On the other side of my family, I am the granddaughter of a German American Catholic deeply faithful woman who voted and advocated against abortion. I am the daughter-in-law of a Vietnam veteran and Lutheran school graduate from rural Missouri who put a Trump sign in his lawn and a MAGA hat in his garage. I am the niece of an aunt who sparred with her father, my grandfather, over the possibility of a Christian supporting Trump, an aunt who felt ostracized by her father because of her political and religious beliefs. I am the wife of a man who is the only one among his high school friends who voted for Hillary and who was mocked for doing so. I am the sister-in- law of an African American woman who protested with Black Lives Matter in Chicago. I am the sister-in-law of a half-Hispanic woman who lives in deep-red rural America and is conservative herself. 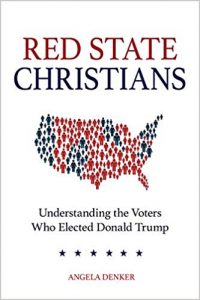 My family makes a patchwork of red and blue, Evangelical and mainline, urban, suburban, and rural. I resist the idea that we must continually make one another the other. In our own families, to do so means devastating separation and estrangement. It’s not worth it. It never is. Red State Christians are not the “other” any more than my own family members are not the “other.” Red State Christians are my family. They’re your family. They’re you. For me, this book is not about some other America that I had to excavate and uncover, like an archaeologist. Rather, for me, this book is about America itself and ultimately about uncovering myself, my family, and my faith.

When I look back at my travels across America, from Dallas megachurches to Appalachian small towns, I realize that I was overwhelmingly welcomed and accepted. Not by everyone. A conservative Catholic college in New Hampshire forbade me from visiting, and Rick Warren’s Orange County megachurch, Saddleback, told me explicitly not to conduct interviews. But the everyday people I spoke to across America in red counties welcomed me. […] In these moments, with these strangers and friends, I found that all across America, people were willing to engage in conversation. I heard stories of tragedy, stories of relentless faith in the face of terrifying adversity, and stories of individual people making resurrection and new life possible even in places where new life seemed awfully unlikely.

Sometimes I heard people say things that sounded intolerant or racist or mean. It usually happened when they were telling me about something they’d heard on TV or on the internet. And at the same time, I learned too that people’s general beliefs often didn’t apply in the particular. People who voted against gay marriage or gay rights often welcomed people who were gay into their own church communities or families. Even racism was hard to quantify. Liberals knew all the right words to say and theories to quote, but I noticed patterns of structural racism that white liberals benefited from all the time yet no one acknowledged. Meanwhile, the white conservatives I spoke with often had more diverse family and neighborhood experiences than the white liberals I spoke to. Which was worse, racism in general or racism in particular? I learned that the dividing lines we draw don’t mean so much in practical, everyday American life. Of course we find that out only when we cross the dividing lines.

In saying this, I refuse to whitewash the troubling incidents I witnessed and heard during the course of my research. Primarily among pastors and media figures, among wealthy and powerful people, I heard people use Christianity to justify American Christian Nationalism that would seek to harm the weak among us: refugees, the poor, women, people of color, the LGBTQ community. These manipulative pastors and Christian leaders wanted money, power, and control, and they saw Trump as a means to these ends.

Still, as I come to the end of this journey, what sticks with me are the stories of surprise. All across America, people are doing surprising things that don’t fit into our prescribed boxes that we use to categorize people. Evangelicals are not a monolith, not universally any one thing, and Red State Christians defy categorization. Eighty-one percent of white Evangelicals voted for Trump—some because they wanted to overturn Roe v. Wade, some because they hated Hillary, and many because they felt like Trump was talking directly to them and speaking for them, whereas Democrats and others didn’t even seem interested in engaging with them in a conversation that wasn’t laced with pejorative or patronizing insults. In neglecting to have that conversation, many Americans miss out on the stories of the people I’ve introduced you to in this book. America is a big country, and the Holy Spirit is alive—not primarily in Washington or on TV screens, but in El Paso and Naples and Cole Camp and Altoona.

The voices that I believe will heal America’s wounded heart are the voices that can speak truth to power in places far from seats of power. I am encouraged by Wes, the half-Hispanic, half-Tongan youth pastor at one of Orange County’s largest churches, who bristles at those who assume he’s on the grounds crew but who relentlessly proclaims the difficulty of the gospel anyway, and thousands listen. Evangelicalism depends on an experience of the Holy Spirit and a dynamic display of God’s power. For many years, that power has been caged inside churches and power-hungry pastors, but what I found across America while talking to Christians in red counties is that American Evangelicalism is beginning to break out of its cage.

At the heart of it all is my own Red State Christian family and the ways it divides and comes together and surprises even me with its love and forgiveness.

A moment of grace that sticks with me happened during something I said I wouldn’t write about, my own family reunion for my father-in-law’s side in rural Missouri. When we got together again for the big reunion this past summer, in a red county in a red state surrounded by Red State Christians and Trump supporters, I figured I should just be a mom and take off my author and pastor hats. When it was almost time to eat, my two-year-old son had a potty accident, and I found myself in the bathroom in the basement of the Missouri Synod [Lutheran] church. [The Missouri Synod does not ordain female pastors.] Everyone would want someone to lead us in prayer, and one of our relatives had been an accomplished Missouri Synod pastor. I figured we were good to go. When I came out of the bathroom with my son, everyone had started eating. My husband came up to me with a puzzled look on his face. “Where were you?” he said. “Everyone was looking for you. They were waiting for you to pray for us.”

When I think back on my whole year researching Red State Christians, that story stands out. It reminds me that all Americans, Christian or not, conservative or not, have a remarkable gift for acceptance. If given the chance, we can accept one another, learn from each other, and build an entirely new country built on justice and freedom for all.

My Red State Christian story began with Trump, with his bombast and his uncanny ability to mollify moral concerns and unite an Evangelical Christian coalition of voters. Still, the place my story ends is far from Trump. It ends in places in America where people are forming unlikely alliances, surprising each other and surprising political pundits, to build a future that looks nothing like the Republicans or Democrats of the past.

Grace, for American Christians and for all of us, is a difficult thing. It means starting from a place where all of us have been wrong, and knowing that we all have something to learn from each other.