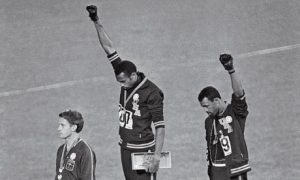 “God Is Love, ” inscribed on the tracksuit of the athlete who would become the second-fastest man alive, is what first caught the attention of Australian Olympic official Ray Weinberg in the early ’60s. But it wouldn’t be until Peter Norman participated in an act of holy mischief for human rights (which became known as the “Black Power Salute” of the ’68 Mexico games) that this Australian would so publicly put 1 John 4:8 into practice with his African-American brothers.

Life magazine said it was one of the most influential images of the 20th century. Two African Americans and one white Australian took to the winner’s dais and, motivated by their shared faith, all wore Olympic Project for Human Rights buttons while the black Americans raised their fists.

Gold medal-winner Tommie Smith and bronze medal-winner John Carlos approached Peter Norman after the race. They asked if the Australian believed in God, if he believed in human rights, and if he would join their witness. Norman explained to Carlos and Smith that he had been raised in the Salvation Army, where service to Christ was never separated from service to the poor and the hurting, that he understood the importance of their cause, and that he would be honored to join them.

Tommie Smith, in his book Silent Gesture, explains the symbols of their prophetic actions that call back to the faithful creativity and holy mischief of Hosea, Jeremiah, Amos, and Jesus himself in confronting the unredeemed “Powers”:

The actions of all three men cost them dearly. As documented in Matt Norman’s brilliant film,  Salute, Tommie Smith and John Carlos were kicked out of the athletes’ village, suspended and banned from the Olympics. For the Australian Peter Norman, participating in the organised action cost him his athletic career and he was not chosen for the next Olympics despite being one of the fastest men in the world.

Just as Martin Luther King Jr. gave his life earlier in 1968, so these three men lived out the costly truth of the cross. As Dr. King put it,

There are some who still find the cross a stumbling block, others consider it foolishness, but I am more convinced than ever before that it is the power of God unto social and individual salvation.

As the Olympic Games in London officially begin let us remember the witness of these courageous athletes, what it cost them, and how important it is that we cheer on our athletes. Not simply cheer them on in their sporting events, but also in taking what often are unpopular Christ-like actions that prophetically call for the end of injustice. In doing so they witness to another world being possible. A world that reflects the verse that Peter Norman would wear on his tracksuits, that “God is Love” and that in Jesus this love has started to “flood the earth like the waters cover the seas.”