Despite the gentrification of its core over the past decade, Winston-Salem is still a sleepy Southern town on a summer Sunday evening. I get off the highway at Martin Luther King Drive and make my way to Trade Street, a five-block stretch, without passing more than a few scattered pedestrians. The white folks outside the bar on the corner don’t seem to realize this place is about to become ground zero for America’s 21st-century civil rights struggle.

But they know something is stirring—at least, they do if they’re anything like the other white folks I’ve been talking to in North Carolina’s Piedmont this weekend. Twenty miles north, where I grew up, the Southern Baptist church was astir with stories about the caravan of pick-up trucks that rode proudly before the senior citizens’ front porch rockers, spilling a stream of Confederate flags across the landscape they oversee. They weren’t even sure what had given rise to this display, but it felt ominous to them.

Back on Trade Street, I see both sides of the street lined with cars that have spilled out of the Union Baptist Church parking lot. A young African-American police officer stands at the corner, not directing the crowd but watching it, like the overseers on their porches in the county. This isn’t a normal Sunday evening beat for him, either. What’s a white man in a minivan doing at Winston-Salem’s largest black church?

Some answers are on the evening news: on Monday, July 13th the case of NC NAACP v. McCrory (North Carolina’s sitting governor) is scheduled to open in federal court. “Winston-Salem is our Selma, ” says NC NAACP President, Dr. William J. Barber, II. His organization is suing the state because a piece of legislation signed by the governor in 2013—HB 589—gives black and poor people in North Carolina less access to the franchise than they had on August 6, 1965, when President Johnson signed the Voting Rights Act.

But a court case alone doesn’t stir up a sleepy Southern town on a Sunday evening. To see what’s happening in Winston-Salem, we must go inside the sanctuary of the Union Baptist Church. But this is harder than it sounds. Though, as I said, it’s the largest black church in town—a sanctuary that easily seats 1, 200—a peek through the windows at the back reveals that it’s standing room only. I stand against the back wall with a dozen ushers, scanning the crowd to see who is here. Many are locals, meeting the Moral Movement family for the first time. But the faithful are there too, from across the state. I see a retired doctor from Chatham County, a minister from Greensboro, an agrarian from outside of Charlotte. I recognize student activists from NCA&T and North Carolina Central. Since the mid-2000’s, this coalition of justice-loving people has been working together to build power for a new kind of politics in the South. These are the people who got North Carolina to vote for Barack Obama in 2008—not because he was the Democratic candidate (North Carolina hadn’t gone blue in half a century), but because he promised change we could believe in. 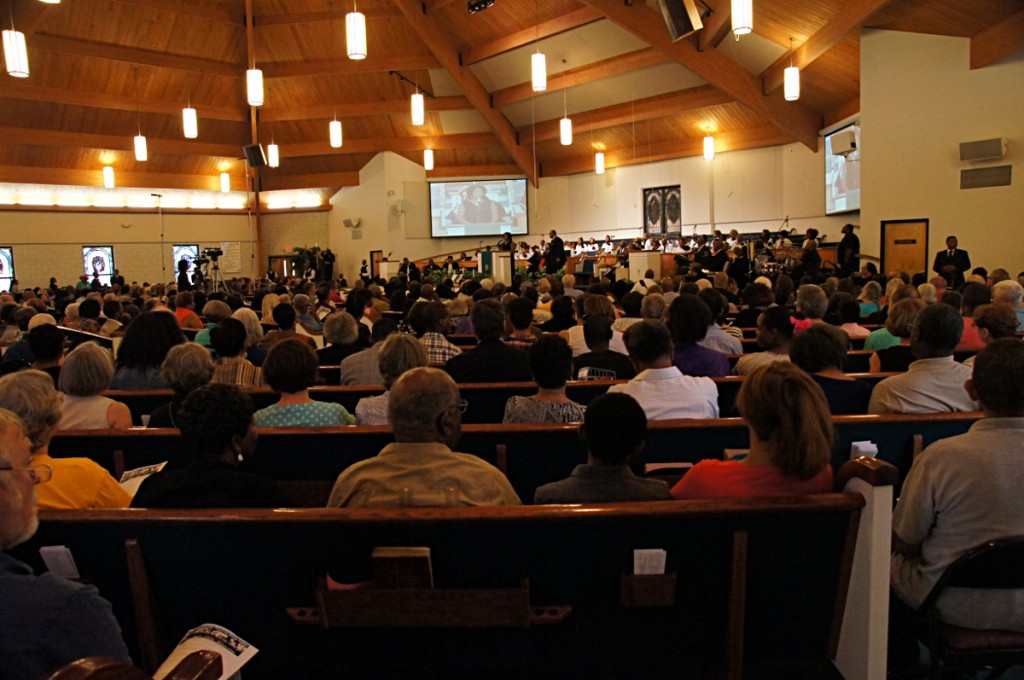 The people in this room know, though almost no news outlet has been able to get it, that the onslaught of regressive policies in North Carolina since 2010 are a direct and concerted backlash against our grassroots organizing. The millions of dollars in mystery money that poured into NC state legislature races, the gerrymandering of voting districts that followed this power grab, the supermajority that was won in 2012 at the state level, and the radical re-making of our state government that followed in 2013—all of it was a corporately funded attack on the radical democracy represented in this sanctuary.

Which is why more than 1, 000 of us were arrested in the summer of 2013, week after week in the largest state government-focused civil disobedience campaign in American history.

It’s why, despite the fact that the media’s attention has turned to other things, Moral Mondays have continued, with over 200 events organized across North Carolina for the past 2 years.

This is why a state superior court judge already ruled the arrests made at our state house in 2013 illegal. The people, upon whose consent our government is based, have been exercising our right to assemble and petition our elected officials for the redress of grievances. If the language sounds a bit dated, it’s because it’s straight out of our State Constitution, re-written and ratified by black and white folks after the Civil War to right the wrongs committed under the Confederate flag.

Rev. Barber, who has been the architect and chief spokesperson for this Moral Movement, is greeted at the pulpit in the same way Tar Heels used to greet Coach Dean Smith. Every person in this room trusts him, not because he floats above the people on another plain but because we’ve seen his character, his commitment, and his gift. In the midst of complex situations, Rev. Barber can see, like the biblical prophets, with a clarity that is both personal and political. We are here, Rev. Barber says simply, because the truth demands a necessary interruption. This is why Jesus turned over the tables in the temple on the “first Moral Monday.” It’s why we interrupted the state house when they were legislating evil. It’s why we went to court to defend our actions, and it’s why we’re back in court now.

NC NAACP v. McCrory is a necessary interruption to the institutionalized racism that is killing black and brown people. For all the talk around “black lives matter, ” Rev. Barber warns, we are in danger of only affirming that black death matters if we accept that the martyrs of Charleston deserve nothing more than the removal of a Confederate flag from their state house. Yes, the flags should come down. But if they go away while the unjust laws remain, then it may be even harder for us to see that the root of injustice is in an imbalance of power.

And the fundamental power of citizenship in this country is still the franchise.

Yes, this is our Selma. But maybe it is more. It is, after all, quite literally the Voting Rights Act’s Jubilee. Between now and August 6th, the 50th anniversary of that legislative victory, a case will be made in federal court that the work of Freedom Summer and the Dallas County Voters League, the work of SCLC and SNCC and hundreds of Citizenship Schools, has been undone by James Crow, Esquire, the sophisticated Southern strategist who followed his father in spirit if not in form.

In the 25th chapter of Leviticus, God tells Israel that every 50 years they shall proclaim a jubilee. Debts should be canceled, slaves liberated, and land returned to its original owners. The persistent nature of injustice is a given among broken human beings, the Bible says. Every 50 years or so, an interruption is necessary.

Some Bible scholars say the strange thing about the jubilee legislation is that we have next to no historical evidence that it was ever practiced. For people of faith, Winston-Salem is one opportunity to set the record straight.